Petey likes it simple; very basic, with no fanciness.  He’d be quietly satisfied if it was the same way every single time.

Sometimes simple is ok, but I really like to mix things up; today one way, tomorrow, another.  With me, variety is the spice of life.

An episode of “Chopped” on Food Network got me to thinking about grilled cheese.  A contestant decided to make a chicken pot pie grilled cheese sandwich.

Then she commenced to making a giant, gloppy mess of the whole thing.

She made chicken pot pie filling.  Then she cut some slices of brioche bread.  She filled it with pot pie stuff, slapped on a slice of cheese, and threw it, unbuttered, onto a ridged grill pan.

It didn’t brown, got stuck to the grill, and leaked all over.  She ended up shoveling it into a bowl and serving it to the judges like that,

Shockingly, she was chopped.

If she had really wanted to make a chicken pot pie grilled cheese, there were actually two ways that probably would’ve worked.  She should have made a very thick filling.  Then assembled it by using one slice of cheese on each slice of bread, spreading a layer of filling between them, and browning and crisping it in a non-stick pan.

Or alternatively, made two thin-ish grilled cheese sandwiches, cutting each in the shape of a gratin dish, and using them as the top and bottom crust of a traditional pot pie.

She would not have gotten chopped.

Even though a grilled cheese seems like the epitome of simple, it’s also simple to make a bad one.  You can burn it, over or under melt the cheese, or make it into an oil slick.  But with a few tips, a delicious, well-made sandwich is mere minutes away.

Break out your well-seasoned cast iron frying pan (or a heavy non-stick skillet), and set it on the burner at about medium-low.  Smear a very thin layer of mayo on one slice of bread.  The egg in the mayo will give the bread an almost French toast-like surface.  Place the bread mayo side down onto the heated skillet.  Layer on the cheese and any other fillings, starting and finishing with the cheese so it will act as a glue.

Remove and let sit for a couple minutes then slice and serve.

If you’re Petey, you pick Velveeta on Wonder Bread.

Here are a few ideas if you’d like to shake things up:

The Kid likes fried green tomatoes, bacon and pimento cheese on a hearty homemade white made with a touch of cornmeal.  Or crazy sharp cheddar on chewy, mouth-puckering sourdough. 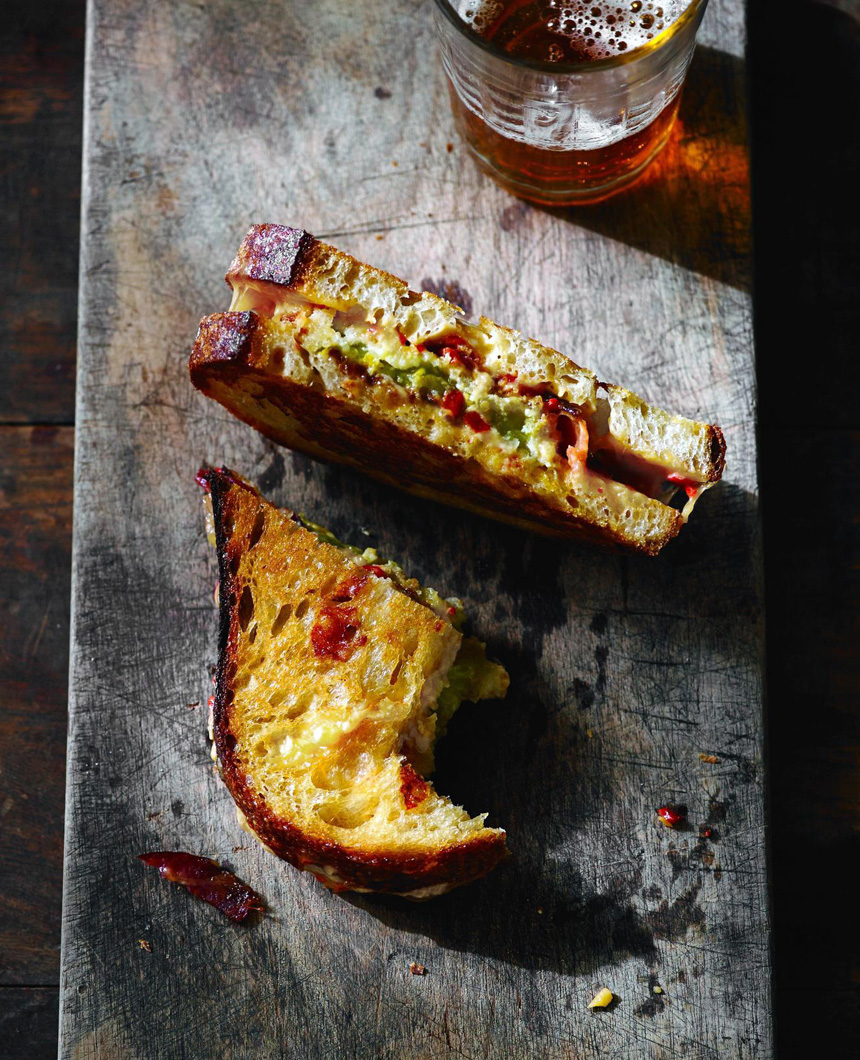 I like caramelized onion and goat cheese on French baguette. And also sautéed mushrooms, short ribs and Laughing Cow on Hawaiian bread.

So here’s my advice: go to the fancy cheese store, and buy some new interesting types.  Then go to a good bakery and get a couple loaves of funky breads.  Visit the produce department, and pick up some guest stars.

Then go into your kitchen and have a grilled cheese party.  No RSVP required.

One thought on “Don’t let the cheese stand alone”