That’s a phrase one of my culinary heroes, Alton Brown, uses.  It’s meant to get the cook to back off and not overwork it or tweak it to death.  Like over mixing biscuit dough, developing the gluten, and ending up with tough, rubbery, inedible results.

It’s also what I tell myself when making mashed potatoes.

I mash them by hand with a good amount of butter.  When the spuds are mashed,  but still chunky, I mix in buttermilk, about ¾ cup at a time until they are just a little thinner than I’d like (they’ll tighten up while standing).  Then I cover them and walk away ‘til service; because if I continue to stir, I’ll develop the starch in the potatoes, and they’ll end up gluey.

But gluey can actually be a desired trait in a certain potato dish.

I love America’s Test Kitchen.  They have cookbooks, magazines, and a pair of PBS television shows.  Using theirCook’s Illustrated magazine, I finally got over my fear of cooking sugar; caramel, fudge, the whole candy thermometer megillah.  I also appreciate that if they offer a recipe, they have tested it into the ground.  One of The Kid’s culinary schoolmates was an America’s Test Kitchen intern and has verified that each dish was made with hundreds of variations to be assured of having the very best, most successful, recipe.

One Sunday afternoon I was watching an episode of ATK, and became extremely intrigued by a potato side dish they made.

It was called pommes aligot (pronounced “pom ally go”).  It’s a dish from the Aubrac region in France.  Aligot basically turns conventional mashed potato wisdom on its head.  The potatoes are whipped like crazy, cheese is added, and more stirring ensues. 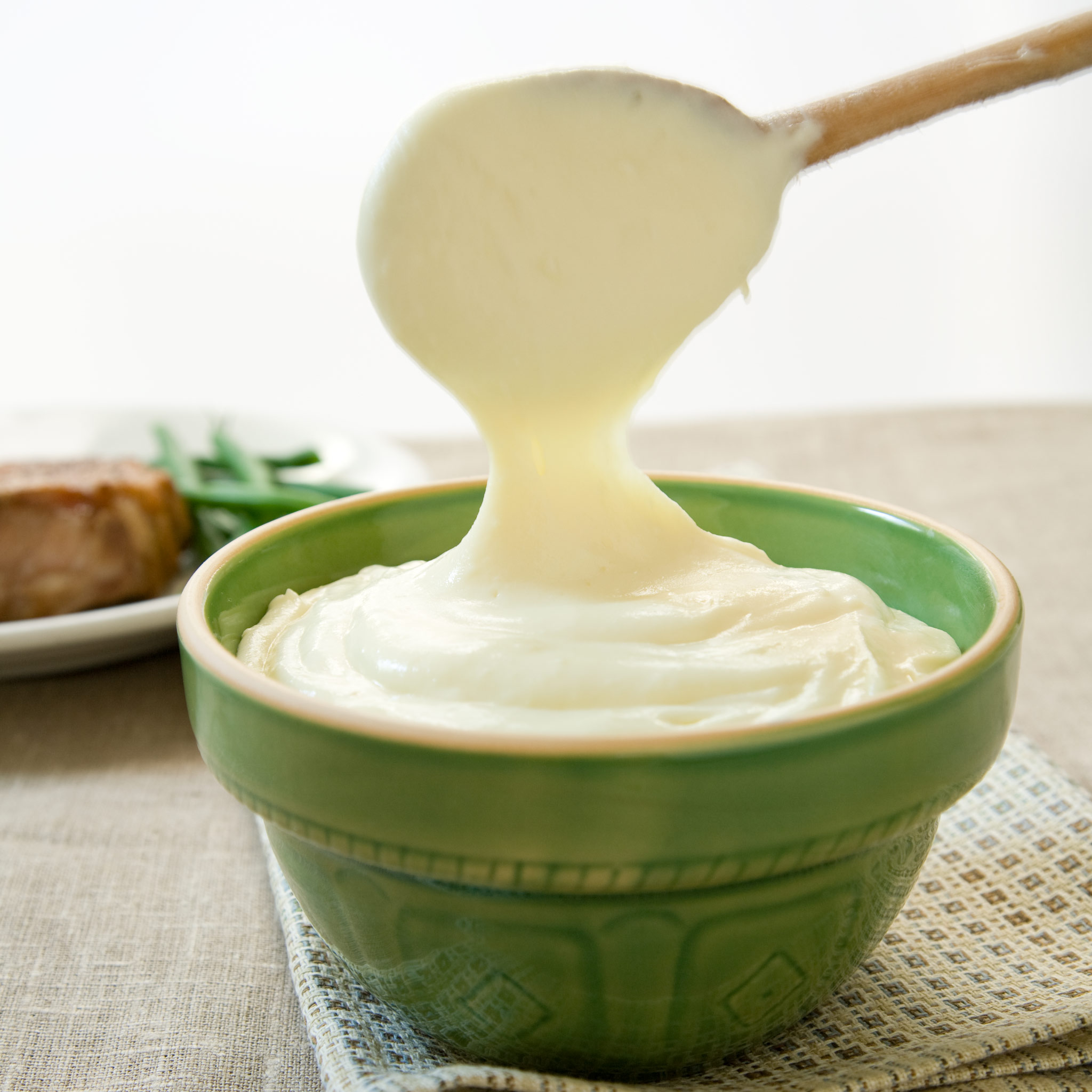 The result is a rich, creamy, cheesy dish that is shiny and elastic.  The French sometimes use this as a dip for bread sticks and raw veggies, kind of like a fondue.

In France the dish is made with Tomme; a semi-soft cheese made in the Pyrenes and Alps regions.  It is almost impossible to find in the states.  Christopher Kimbel and the gang at the Test Kitchen came up with a gruyere/mozzarella combo to mimic flavor and texture.

I don’t buy a lot of Gruyere, and was pretty horrified by the prices.  I didn’t want to get too far off the reservation the first time I made the recipe, so I used Gruyere, but found a smoked version that was two bucks cheaper.  It added a nice, subtle smoky flavor to the finished dish.

Peel the potatoes, cut them in half, then into 1/2-inch slices. Place in a large pot with 3 tablespoons of salt. Add water to cover the potatoes by at least an inch. Bring to a boil and cook for fifteen minutes or until easily pierced with a paring knife. Drain the water. Put the potatoes in a food processor with the minced garlic, salt to taste and the butter. Pulse a few times, add the milk, and pulse until smooth. Return the mixture to your pot and turn heat to medium. Sprinkle in nutmeg and pepper.  Slowly add the cheeses, stirring vigorously with a wooden spoon while doing so, over a period of 3-5 minutes, until stretchy, elastic consistency is achieved.  Check for seasoning.  Serves 8.

I made them on Sunday night with some Denver steaks I was lucky enough to catch on sale, along with peas and carrots.  It was a Valentine’s dinner that wowed Petey.  The spuds turn out glossy and gorgeous.

To be really honest they are at their most basic level, cheesy mashed potatoes.  But, the type of cheeses is unusual, and the method of preparation is fancier.  These are gorgeous, velvety mashed potatoes with a sexy French accent.

I googled “Sexy French”, and this rather attractive young man came up.  Is he French?  Don’t know, don’t care.