Remember when pistachios were red?

When I was a little kid, pistachios came in bright red shells.  You could always tell when somebody had been into the pistachios.  There was no hiding it.  Fingers, mouths, and faces were stained an unnatural cherry.

The reason why they were red was because Iran was our major source for pistachios.  The producers dyed the shells to hide stains and imperfections.  After the Iran hostage crisis in 1979, the American government imposed sanctions on the nation. No red pistachios for you!

And when the disco-era ban on anything Iranian was in effect, pistachio trees in California, which had been planted in the 1800’s, flourished, and replaced the nuts from overseas.  Due to time-sensitive handling, the shells remain pristine, and consequently, retain their natural hue.

Now it’s a lot harder to tell whose hands have been in the nut jar.

Poor Petey is one of those kids whose birthday falls right after the holidays, so we always try to make a fuss.  I cook his favorites for dinner, and we make or buy him something very special for his gift.

The Kid and I had planned on making a coconut cake, but both of us are pretty coconut-phobic, so we decided to make him another sweet treat which had a certain level of difficulty.  I could whip him up a batch of brownies in ten minutes—we wanted something which had expensive ingredients, and a high possibility of failure, so he could taste our loving efforts in every bite.

I may have mentioned it before, but the man has a prodigious sweet tooth.  He had to be the kind of toddler you’d find digging a spoon into a 5-pound bag of Domino.

We decided, because cooking sugar can be tricky, to make him nut brittle.  And because a large bag of the shelled version runs around twenty dollars, we’d use pistachios.  Folks, we were cooking without a net.

We based it on a recipe from Food and Wine magazine.  But all brittle recipes are basically the same, with just a few variations of flavoring and finishing.

In a large saucepan, combine sugar, water, butter and corn syrup and bring to boil. Cook over moderately high heat, stirring occasionally, until the caramel is light brown and registers 300 on candy thermometer.  Remove from heat and carefully stir in baking soda and vanilla. The mixture will bubble. Stir in nuts, then immediately scrape the brittle onto baking sheet. Using a greased silicone spatula or a greased offset spatula (The Kid and I worked together, so used both), spread brittle into thin, even layer.  Sprinkle with salt. Let cool completely, about 30 minutes. Break brittle into large shards. 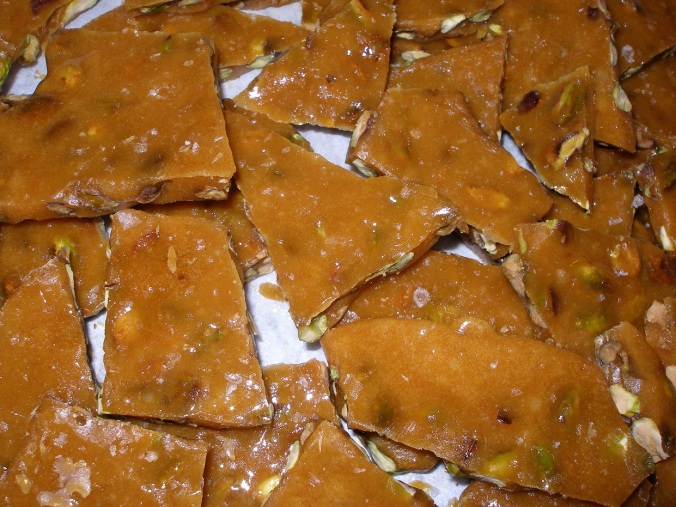 The Kid has a genius trick from culinary school to clean pot and tools.  Fill the pot with water, place in all the tools used (including candy thermometer) and put on burner set to medium high.  By the time the water comes to a simmer, the sugar will be re-melted and wash right off.

It turned out beautiful and delicious.  I guess growth in middle age is possible.  It’s been five days since his birthday, and Petey still has some left.  Not much, but some. 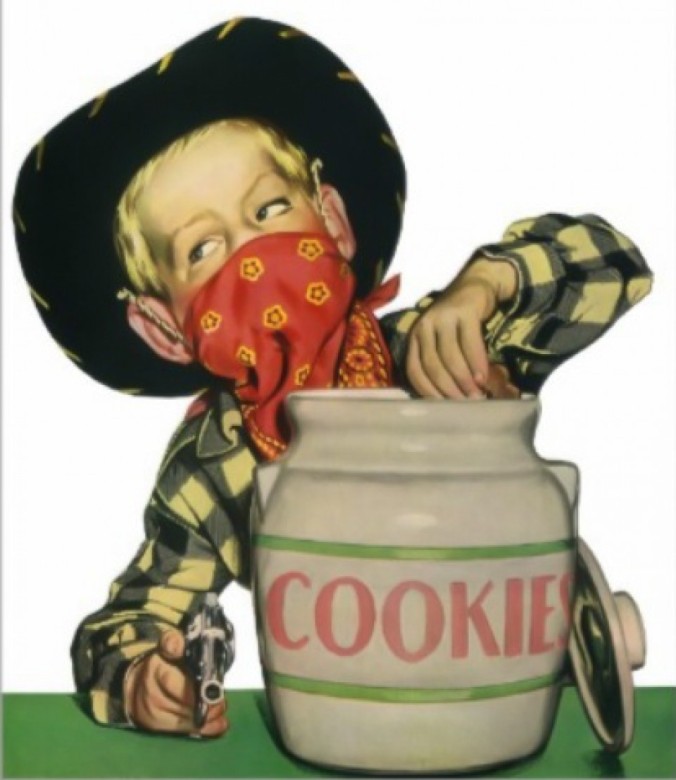