Last week I talked about spices, and warm flavors.

Fresh herbs are always best, but sometimes you don’t have the luxury.  There’s some dried thyme, as well as oregano and dill in my spice cabinet in case of emergencies.   But because those dried herbs can quickly lose their mojo, keep dried herbs no more than six months (label the bottle with date you brought it home).

To keep the fresh herbs longer, you’ve got two choices.  Either lay out about 6 pieces of paper towel on the counter.  Spritz the paper with cold water.  Then set a bunch down, and roll.  After that bunch is covered, lay down another bunch.  Roll, then lay another bunch, and so on.  When all the herbs are wrapped up, spritz the paper bundle, and place in a large zip top bag.  Refrigerate. 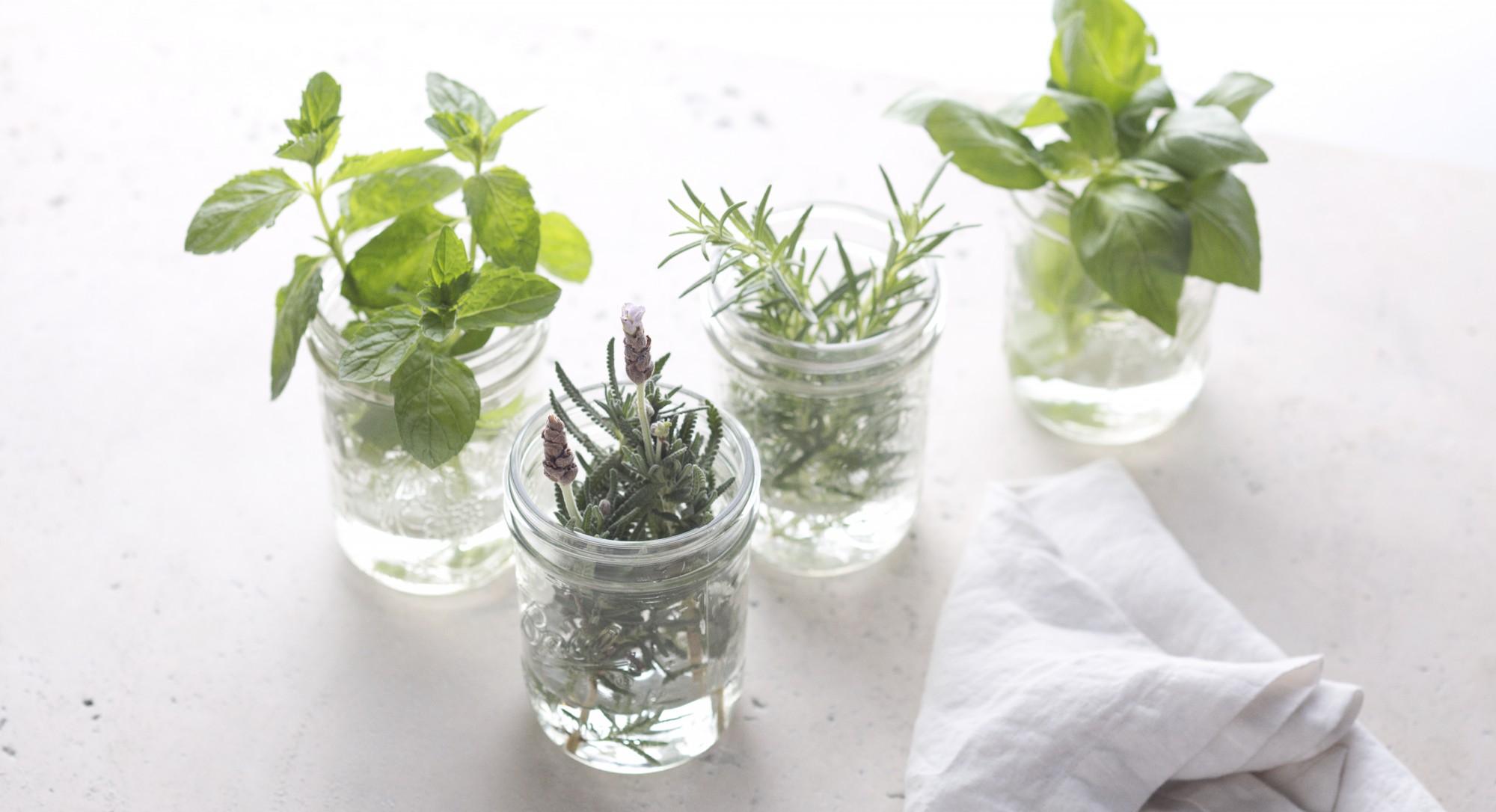 You second choice is easier but you don’t get quite as long a shelf life.  Trim the ends off the herbs.  Fill a tall glass with water, and place in the trimmed herbs like flowers in a vase.  Change water daily.

“Rosemary for remembrance”.  I’ve grown rosemary since Uncle Will, my honorary grandfather, died when The Kid was two.  I bought one very hardy, low maintenance Mediterranean variety which is now a large shrub outside my front doors.  It’s both fragrant and ornamental—many places use it for landscaping.

Basil is a soft leafy herb with that distinctive, fennel/licorice flavor.  It’s a staple in Italian foods.

I like to heat two cups of extra virgin olive oil and add a big handful of each herb.  Before adding the herbs I roll them between my hands to bring out the oils.  I then let the herbs steep until it cools.  I strain it and store it, covered, in the fridge.  This oil is great for dipping bread into.  It’s also good brushed on meat before grilling.  And if you’re not big on red sauce on pizza, brush a little of this aromatic oil on it, then arrange your toppings.

I make a paste of fresh thyme, lemon zest, Parmesano Reggiano, smashed fresh garlic, olive oil, and salt and pepper.  I either crust a pork tenderloin with it or smear some under chicken or turkey skin.

Quite a few years ago my mom developed an allergy to eggs, and from then on, left them out of the potato salad.

I discovered I liked it better without eggs, so I made it that way, as well.  Only I added fresh dill and flat-leaf parsley.

I made it one night when we were visiting family friend Chef Chrissy.  When I served it, Chrissy mentioned that it was a little ‘passive’.  I think that was a nice way of saying boring.  Then Chrissy’s dad, Bear tried it.  He informed me that it was the best tater salad he’d ever eaten.  So from then on it was called…

Starting with 1 cup, stir in mayo.  If you need more, add more.  Season, taste, and re-season if necessary. Cover and let sit at room temp for 1 hour.

When using fresh herbs in cooking, the later you add them, the fresher the flavor will be.  And always hold a little back, to sprinkle on the finished dish.  If only you could perk up your own life the same way…