Growing up my dad was in the Coast Guard, and we moved every few years.  Some places I liked, some not so much. 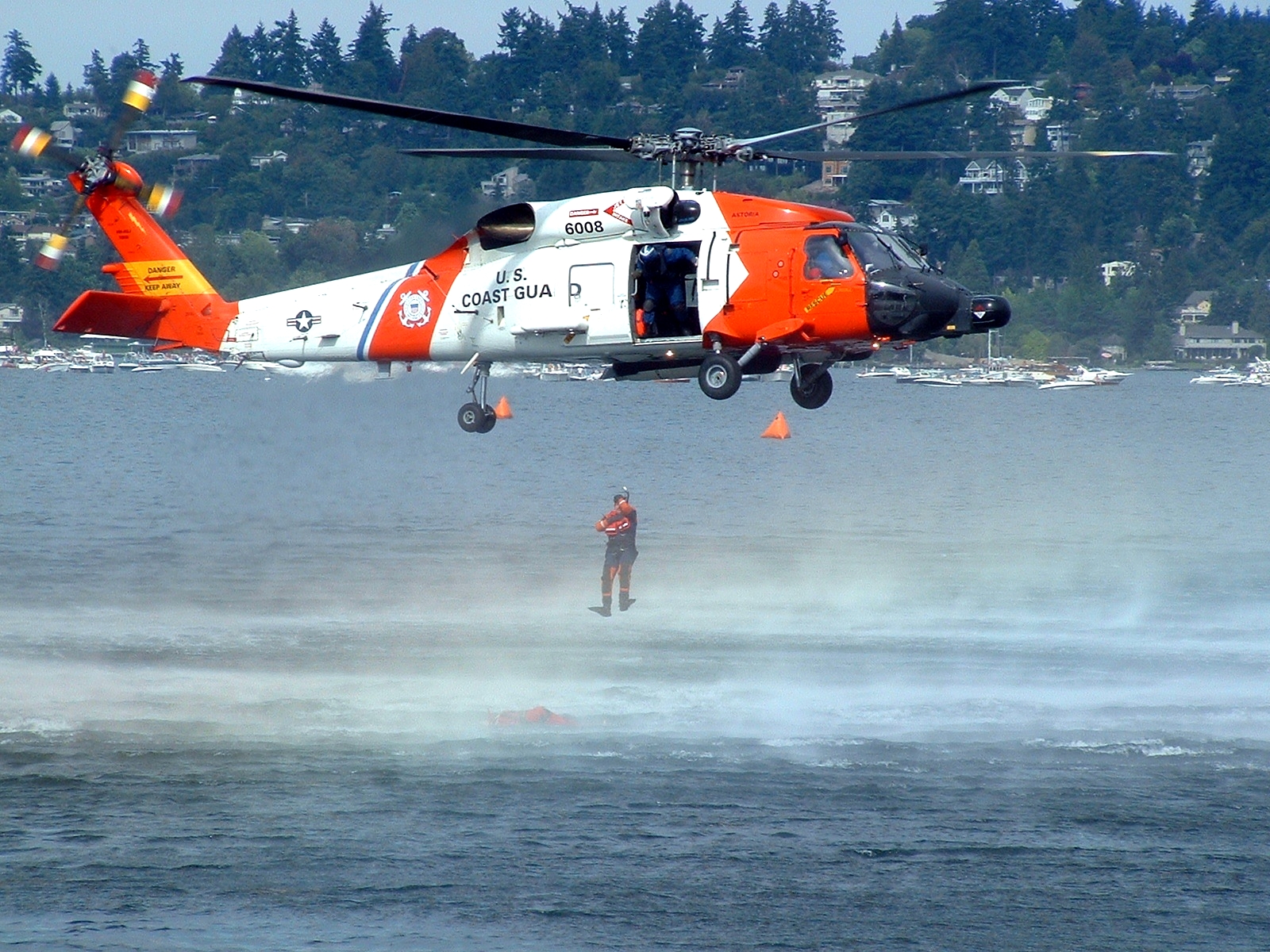 This was just another day at the office for my dad…

But thirty years ago, a young couple moved to the Bull City.  And like kudzu, Durham has crept through me and wound itself about my heart.  This town is funky, fierce, and fabulous.  And I wouldn’t live anywhere else in the world.

Saturday I had lunch with two high school friends, Lucy, and newlywed Maxie.  We try to set everything else in our lives aside once a month, and meet.

This week was Lucy’s pick.  She chose Dame’s Chicken and Waffles (317 W Main St, Durham).  Fun fact: contrary to my assumption, Dame is not a woman,.  It’s actually the nickname of owner, Damion Moore.  Another fact: they are always swamped.  The wait for a table on a Saturday afternoon was an hour and forty-five minutes.   You can make a reservation online.  Do it. 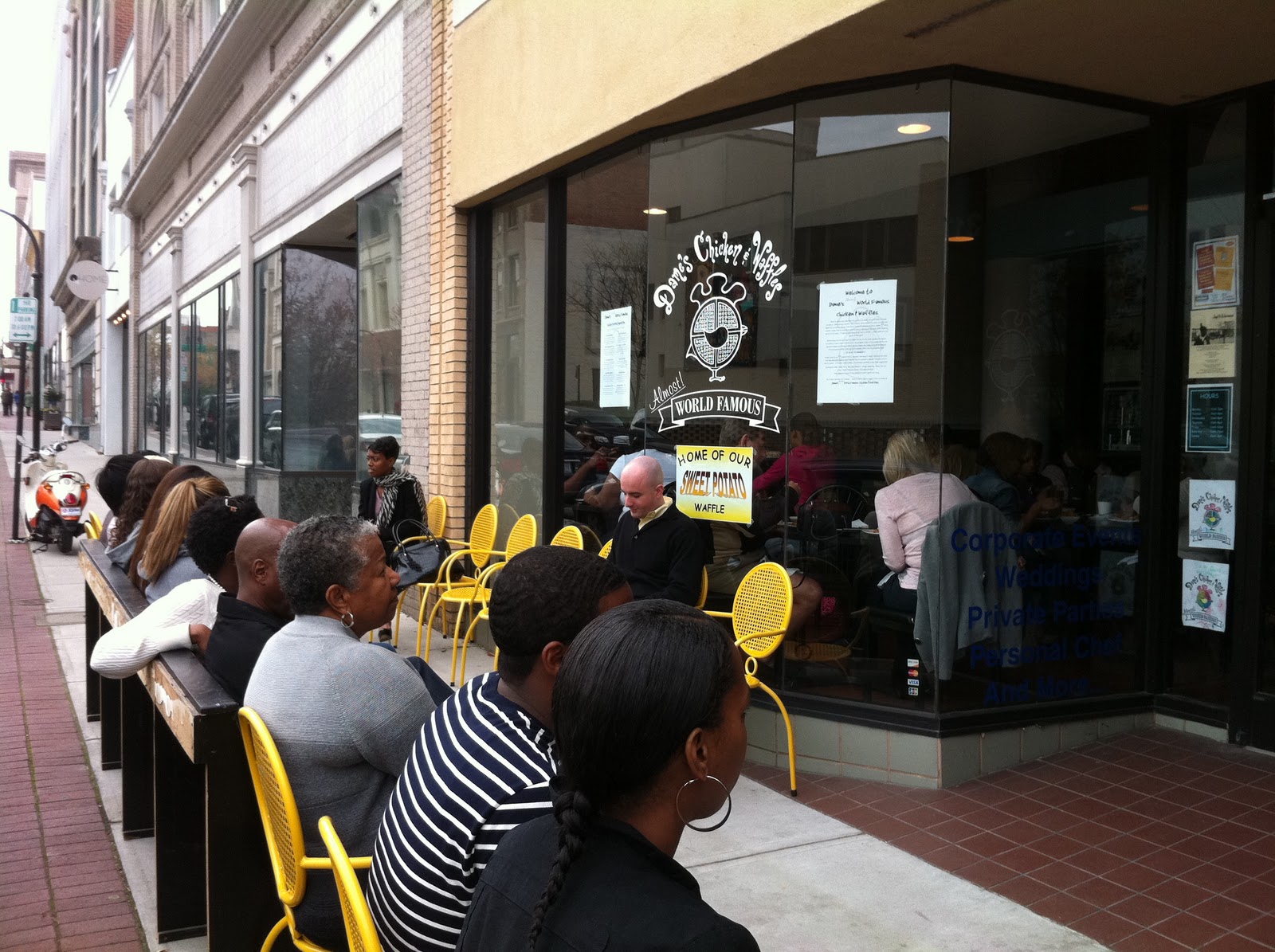 It was the first visit for all of us, so we each ordered something different to get a bigger sample of the menu.

Here is my biggest takeaway.  Somehow, it was as if they had turned the flavor volume up to 11.  The taste of everything was bright and vivid.  I had macaroni and cheese, which was some of the best I’ve ever eaten.  I could actually taste the pasta; it wasn’t just the scaffolding supporting all the yummy cheese.  The chicken (Lucy and I had fried breast cutlets, Maxie had fried legs) was moist, deliciously crunchy, and tasted like chicken—it wasn’t just texture.

The waffles were really good—crispy on the outside, soft and tender inside.  And each plate came with something they call a schmear.

A schmear is Dame’s take on compound butter.  Here again, the flavors somehow seemed cleaner, brighter and stronger without being overwhelming.  I had almond vanilla, Lucy orange honeycomb, and Maxie had maple pecan.  There was no mistaking any of them.  Each was a delicious example of the respective flavors.

I begged Ms. Ella, who runs the kitchen, for recipes.  No dice.  I even got shot down when I asked which herb was used in the chicken and macaroni and cheese.  Still no dice.  But I really like the idea of the schmear, so I came up with my own, Dame-inspired butter.

Melt butter in a saucepan, and let cook until it’s foamy and starts to brown.  When the solids are a warm caramel brown, take it off the heat and stir in the honey.  Pour into a bowl and let cool and harden.

When the browned butter has gotten to room temp, place into the bowl of a mixer.  Beat the butter, adding the pistachios.  When the butter is fully incorporated either place in a bowl and refrigerate or place onto parchment paper and roll into a log and chill. Make about 1 ¼ cups.  Use on breakfast carbs, or melt a tablespoon onto a grilled piece of chicken or a pork chop.

After lunch we hauled our over-stuffed, bloated carcasses down the street.  We stopped at Letters Bookshop (313 W Main St).  We each picked up a couple of books, and wanted more.

We then walked around the corner and ended our day together at The Cupcake Bar (101 E Chapel Hill St).  I love this place.  They have 300 hundred flavors and 75 cent frosting shots, for dog’s sake.  I went home with chocolate stout, Irish coffee, and double vanilla minis.  And of course, as always, they were scrumptious.

Five Points was fun and busy, just what a downtown should be.  It made my heart full to be a part of it.  And girl, those folks were turned out.  I saw more cute sweaters, adorable boots, and fashionable outfits than an issue of Vogue.  They were representing Durham right.

Gosh, I love this town. 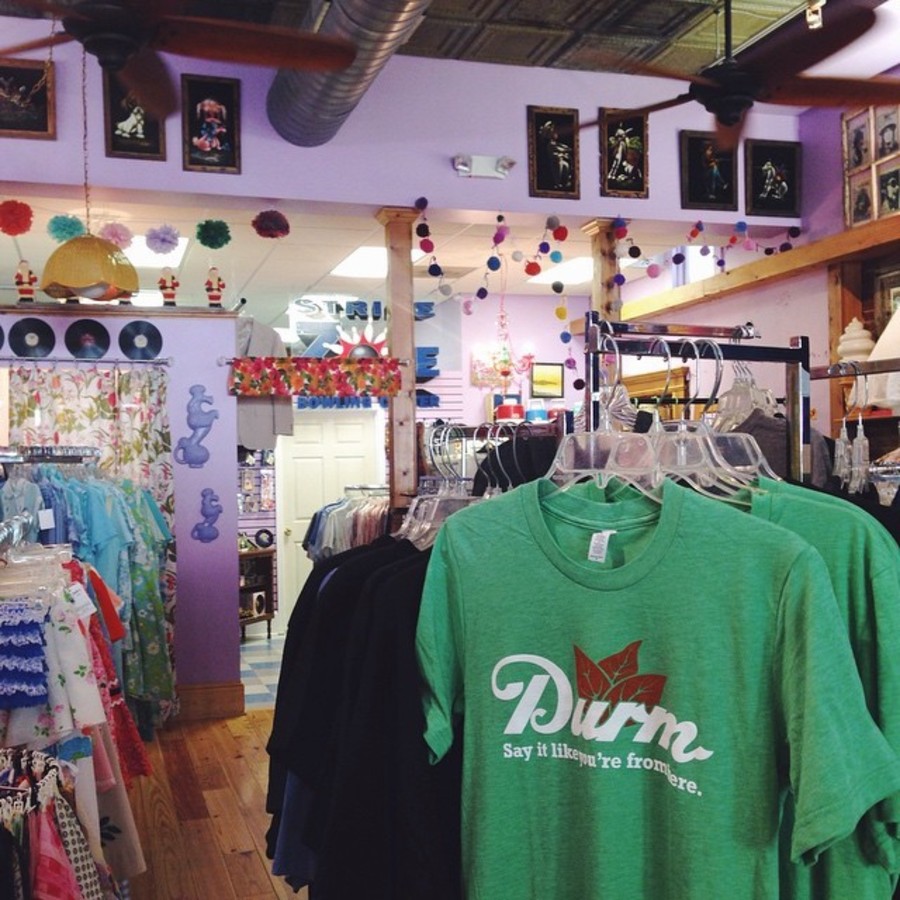 Believe it or not, this was considered fashionable, and sexy in the eighties…and all of that hair is mine.

In our minds, I and my best friends Rhiannon and Bo, ran the high school and owned the whole of Elizabeth City when we were seniors.

We all had cars and boyfriends (my car was a 1971 Dodge Dart Swinger named Lancelot, and my boyfriend was a stone cold fox named Petey), at 18 we could legally buy beer, we had jobs, so we had a little jingle in our jeans, and we had enough (ati)‘tude to light up Time’s Square.

But yesterday was actually my thirtieth-class reunion. Petey and I got back home a few hours ago.  It was all kinds of fun.

Which is kind of amazing, because I’m not sure the Eagles won one game the entire time I was a student there.

Saturday we had an old-fashioned pig pickin’ wonderfully prepared by our uber-talented ‘cue cook and classmate, Frank Lilly Jr.

Eastern NC BBQ is different from other food. It’s something that is only made well by a very few. It’s not a recipe or a ‘dish’.  It is pork slowly basted in mystery, and the past.  Luckily for the class of ‘82, Frank is one of the anointed ones.

Barbecue is never to be attempted by dilettantes and amateurs.

I got crazy sunburned.  Petey, wise man that he is, wore a hat and got into the shade occasionally.   He has a healthy glow–I look like I was staked out in the desert.

Saturday night was the dinner-dance.

There was a catered dinner, a DJ, and a photographer.  Everybody was all dressed up and looking swell.  It was prom for the Spanxx and bald spot set.

Nobody wanted it to end.

When traveling, we don’t like imposing on friends and family.  The visit is happier when all parties can retreat to privacy.

But I don’t like to stay in chain motels.  They all look alike, and usually smell funny.

And Petey doesn’t like Bed and Breakfasts.  He’s very quiet and nest-y, and it makes him feel uncomfortably like a house guest in a stranger’s home.

My conundrum was that is the bulk of the options in town.

The last time I visited E City, Bo showed me where they held the cast party for her local theater production.

It was a beautiful brick Georgian house on Main St, just a short walk from downtown; the Culpepper Inn (609 W Main St, E City).  In addition to hosting parties, it was also a B&B.

When it came time to make a decision about where to stay, I thought about the inn, but I didn’t think Petey would be up for it.  Just in case, I pulled up the website.

The Culpepper Inn. A very elegant home away from home.

Yes, it was a dreaded B&B, but with a neat twist.  They had the most adorable suite upstairs in the carriage house.  It was a separate building, with outside access, and total privacy.  The flat also contains a shower so big you could play half-court b-ball in it.  That’s my idea of nirvana (the shower, not the b-ball).

It’s a charmingly decorated studio apartment with the amenities of a stately, well-appointed residence.  And it comes with a three-course breakfast.

Holly Koerber, and her lovely daughter Melanie were our hosts, and by the time we left, friends.

The best meal we ate all weekend was at their table, this morning.

Holly’s philosophy is astonishingly Durham-like.  The inn is run in a very environmentally responsible manner.

But it’s her cooking that truly resembles the Bull City.

As much as possible, the food is organic and locally sourced.  I ate some fantastic bacon that they get from a farm in Windsor (a teeny tiny town about 50 miles from E City).  The pumpkin came from a nearby field.  Local honey.  Everything was fresh, and simply, honestly prepared so that the ingredients shined.  Outside our own carriage house door was growing a healthy gaggle of heavenly smelling tomato plants, heavy with luminous jade orbs.

This morning, we had scrambled eggs, the aforementioned yummy bacon, baked cheesy grits, and a pumpkin French toast casserole, along with vibrant fresh fruit.

I thought about that bounty on the 3 ½ hour ride to Durham.  And also about the beauty of that historic home and all of our experiences in town this weekend; how they were truly an illustration of the very best things about Elizabeth City.

As soon as we got back, I called Holly and asked for a recipe.  I was hoping I could beg her for one, but almost before I finished asking, she kindly offered both recipes, the grits and the casserole.

Here they are, in her own words:

Cook ½ cup yellow grits in 2 cups of boiling water with ½ tsp. of salt & ground pepper on low for 5-6 minutes.  Add ¼ cup real butter, 1 cup shredded cheese (any kind you prefer, I like smoked Gouda), and finally, 1 beaten egg.  Put in individual baking dishes and bake at 325 degrees for 25 minutes.  Brush top with more butter and serve.

Bake uncovered at 350 degrees about 45 minutes until a toothpick in the center comes out clean.  You may serve this with vanilla yogurt on the side.

It was kind of disconcerting seeing all my old classmates this weekend.  In my head they were a bunch of eighteen-year-old kids getting ready to take on the world.  But the folks that showed up looked like the parents of those kids.

Until I looked into their eyes.  And then I recognized those nutty guys from NHS class of ’82 (Of course, Rhi, Bo, and I all still look like teenagers).

*Coming soon:  One of my most beloved friends from NHS, Paxton, lives here in Durham.  It was revealed this weekend that the heathen doesn’t like Mexican food.  His partner Alex and I are taking him to Chubby’s for a conversion attempt.

I will spill on our adventures in a future column.