Last week I made one of the best meatloaves I’ve ever made.

And it was all because of the breadcrumbs.

But those crumbs didn’t come from bread.  It was the end of a box of Wheat Thins.  Which bring us to the very best thing about breadcrumbs.

They don’t have to contain bread.

You know, I was gonna say I’d rather have the bread crumbs, but now…not so much.  He’s awful purty.

Japanese panko is the super trendy man-bun of the breadcrumbs world.  A few years ago, to get some you could only procure them by mail order.  Now, they carry them at Big Lots.  You can pick some up at the dollar store.  They even use panko on fish sticks, for the love of Mike.

But panko comes from bread in the same way that jelly beans come from the farmers market.

To produce those Japanese breadcrumbs, they make a slurry of wheat and a few other ingredients.  They then spray it onto canvas sheets, dry them, and flake them off.  That’s pretty much it, but panko was never, in its life cycle, bread.

In my freezer, I have a bag.  Whenever we have a bag or box of crackers that is almost empty, or has gone a little stale, I toss them into that bag. 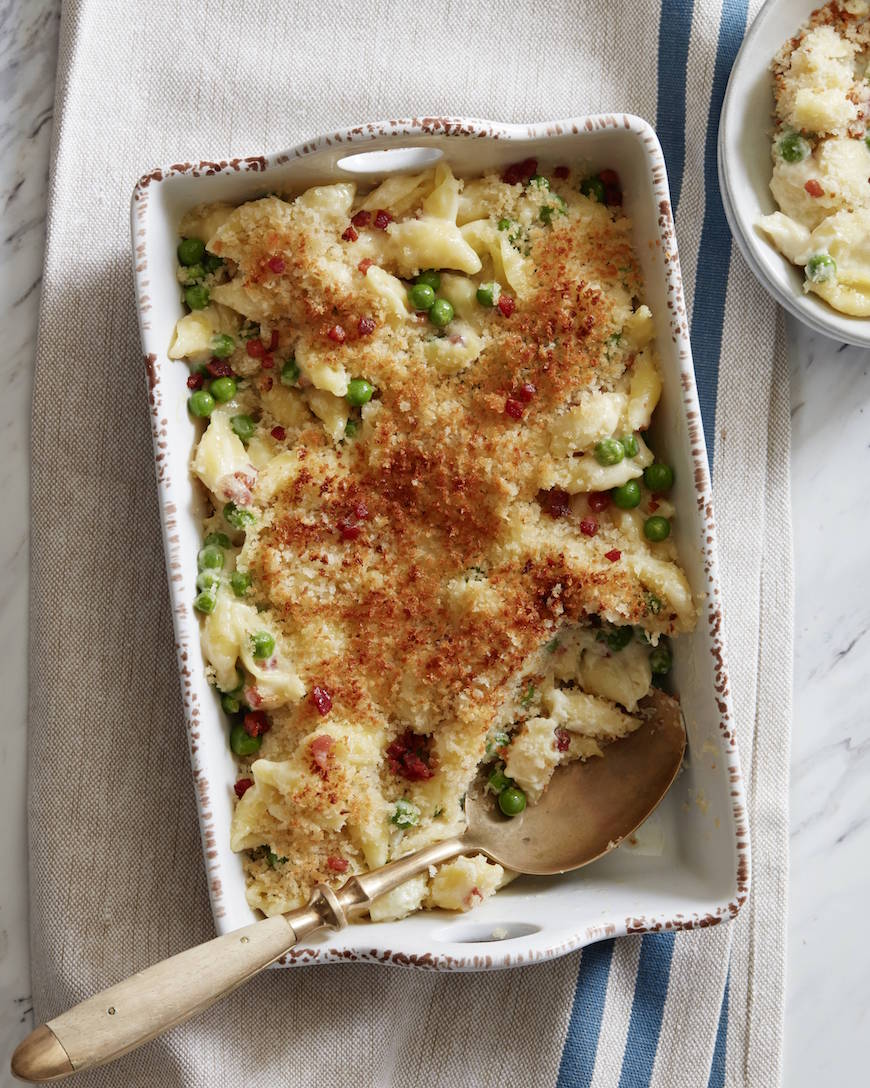 When I make a casserole that needs a crispy breadcrumb topping, I grind up enough to make a cup or so.  Then I season it, add herbs or spices that fit the flavor of the casserole, and pour in a couple of teaspoons of olive oil, or melted butter and stir it through.  After baking, there is a beautiful, golden, crispy crust on top.

When I want shake and bake-style pork chops, I throw all the orphan crackers into a food processor.  Then I throw in some olive oil, salt, pepper, and herbs and spices.  Cheese is also mighty tasty in the mix.  Dryer cheeses like Parmesan and Spanish manchego are really good, and easier to work with, but I’ve used things like provolone and cheddar as well.

And nuts are a breadcrumbs best friend.

Whole Foods has a collection of breadcrumbs that have been enhanced with different nut and herb combinations.  But they are pretty dear, with a couple of cups coming in at more than ten dollars.

But think about the combos you could make in your own kitchen.

For an Asian twist, what about Chinese five spice powder and cashews?  Feeling Italian?  What about hazelnuts, Parmesan, lemon zest and basil?  For a taste of Spain mix Marcona almonds, pimiento powder, and some delicious Manchego into your breadcrumbs.

Hey!  What if I tossed the pasta tonight with some stale, gound up bread?

You can even dress pasta with breadcrumbs.  In the days before freezers, frugal Italian peasants came up with a way to use stale bread.  This recipe is a take on one from the lovely mind of Nigella Lawson.

Salt and pepper, to taste

Bring heavily salted water to a boil.  Add pasta, and cook until al dente. Before draining, remove a cupful of cooking water.

After draining pasta, pour it back into pot, then add second tablespoon of olive oil and half the lemon juice.  Toss to combine in hot pan until much of the liquid’s absorbed.  Add garlic and cheese.  Toss again, while adding enough pasta-cooking liquid to emulsify it into sauce consistency.  Season then taste, and add more lemon juice if desired. Right before serving, gently fold in parsley and breadcrumbs. 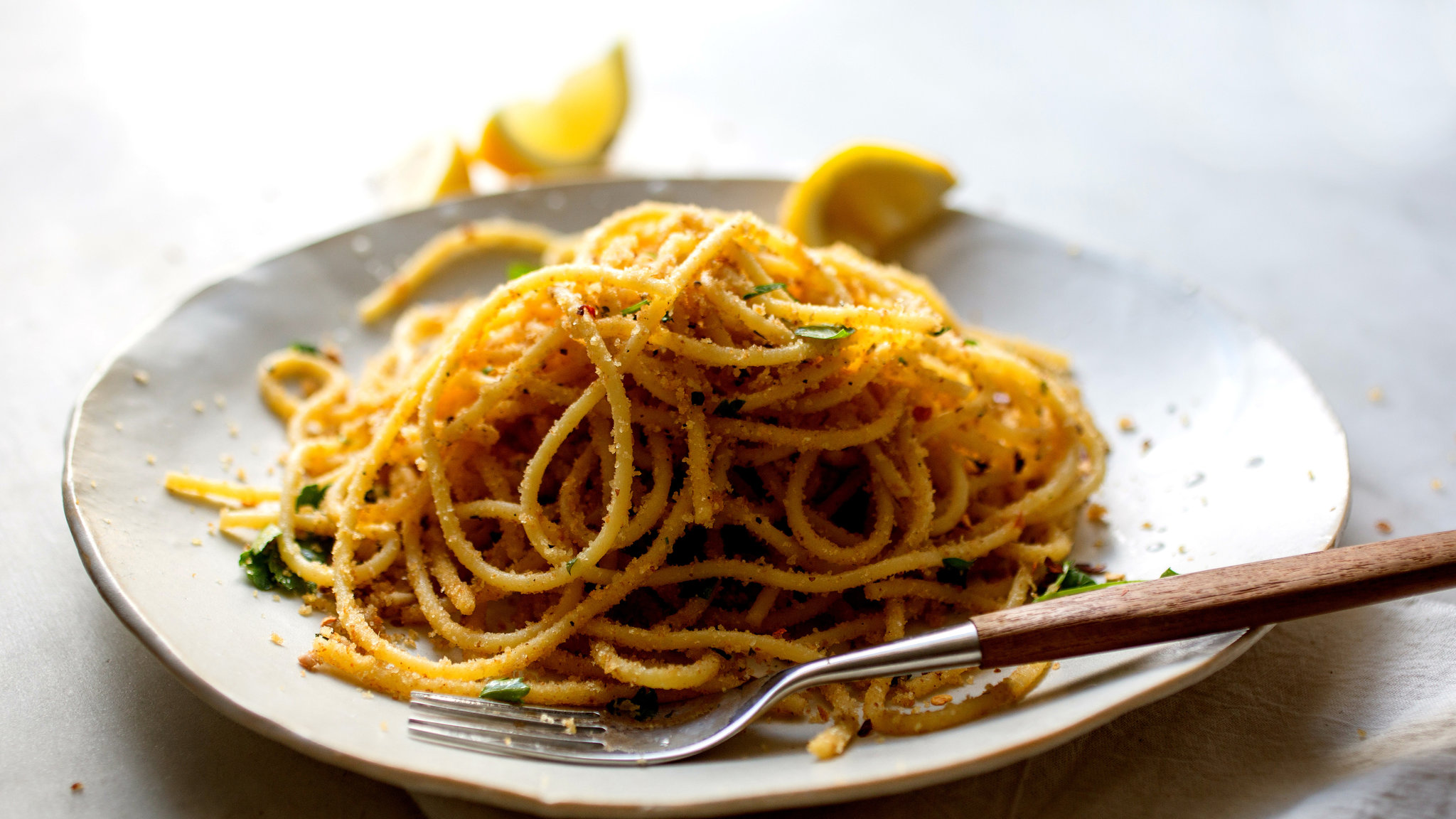 Here’s something else nifty about breadcrumbs.  There doesn’t have to be any kind of bread/cracker product in them.

Next time you need breadcrumbs, break out the potato chips, corn chips, or leftover rice that has dried out in the fridge and you’ve ground up in a food processor.

Now you never need to buy a pre-made can of saw dust…I mean breadcrumbs again.