I feel like I wasted thirty years of my life.

I have a headache.

All those days I drove myself crazy trying to figure out, for one more meal, what protein to cook.  Beef, chicken, fish, eggs, and pork; they’re my usual guest stars.

With pork it was chops, Boston butt, ham, and happily, bacon.

A couple of years ago, I was in the supermarket, checking out the meat that had been marked down, like I always do.  You never know what you’ll find.  That day they had pork tenderloins for about three bucks, down from their usual 6-7 dollars.

Pork tenderloin comes from the full loin.  It’s about eight inches long and a couple inches across.  It weighs between 12 and 24 ounces.  The meat is very tender, if it’s cooked correctly.  It’s very easy to overcook and end up with jerky.  But it’s also very easy to cook right—you just need one simple tool (more on that later).

The flavor is extremely mild, so it’s easy for it to come out bland and flavorless.  But again, that’s easy to remedy.  It also gives you an opportunity for lots of fun.

I usually impart flavor in a three-step process.

1.)Dry marinade-I freeze the tenderloin solid.  Then I choose an herb/spice blend, and liberally rub it over the entire surface.  For one piece of meat I’ll use at least a tablespoon.  I then put it into a zip-top bag and let it thaw in the fridge overnight.

2.)Paint-After searing the meat in a smoking-hot pan, I choose a some type of spread and brush it all over.

3.)Crust-Once the tenderloin is covered in something wet, I roll it in something chunky or crusty.  Then I finish it in the oven.

The most difficult, but also the most exciting part of the process is choosing the components for your pork.

The other night I tried a new combination for Petey and me.  It came out beautiful and delicious.  The spice comes from the Middle East, the dressing and pecans from the Southern US. 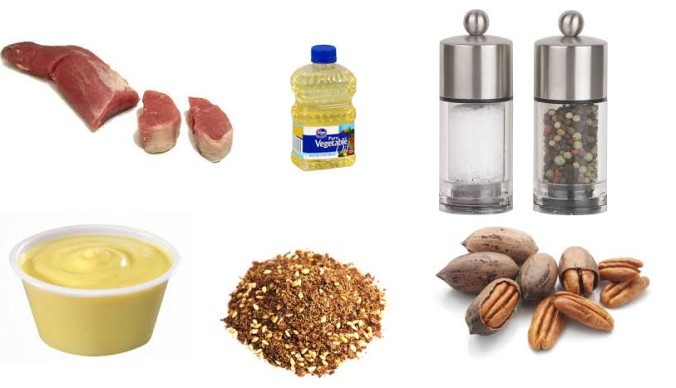 1 tablespoon za’atar; a spice mixture containing thyme, sumac, sesame seeds and other herbs, depending on who makes it.  I purchase mine pre-mixed from Spice Bazaar at 4125 Durham-Chapel Hill Blvd, in Durham.

2 tablespoons Anne’s “The One Sauce”; this is a rich honey mustard dressing.  If you can’t find it, use your favorite honey mustard, or make your own.

In a small bowl, mix za’atar, salt and pepper.  Rub the seasoning all over the frozen pork.  Place in bag, refrigerate, and allow to thaw fully.

Put a large frying pan on the stove, and heat until it’s almost smoking.  Pour in 1 tablespoon oil.  Add tenderloin and turning with tongs, sear all over.  Remove from pan, and place on a plate.

Brush a layer of dressing all over the pork.  Roll the meat into the pecans, completely coating it.

Pour the second tablespoon of oil into a baking dish.  Add pork.  Either using a probe thermometer or an instant-read, cook until the internal temp is 145 degrees (for medium).  If you overcook this, it will be dry and tough.  A thermometer is the best tool to easily prevent that.

Once it comes up to temp (about 15-20 minutes), remove from oven and let rest, lightly covered for five minutes or so.

There are less than 250 calories in a large serving of tenderloin.  It’s also a lean protein, chockfull of vitamin B6, thiamin, niacin, and riboflavin.  There are healthy amounts of omega (3 & 6) fatty acids, too.

We had ours with scalloped potatoes and some peas and carrots.  It would also be nice served with buttered mushroom rice, and roasted asparagus.  I think it could make a very tasty sandwich on ciabatta, with crispy greens, and another schmear of honey mustard.

I’m glad I finally discovered the wondrousness of pork tenderloin.  It just breaks my heart to think of all the delicious meals I’ve missed out on.