*Note-Last week the Henderson column did not run in the paper.  It’s running ths week, but has already been posted here.  So please enjoy a throw-back.

When I went to high school, I lived in Elizabeth City. Way back then, we had horse-less carriages, and gas was only about fifty cents a gallon. So, on the weekend, we would hop into our vehicles, and cruise through town all night long. My best friend Waldo, would load the back of his little Toyota pick-up with lawn chairs. The lucky chosen settled into those seats, and waved to all of our friends as we tooled around. We called these excursions “Hey Rides”.

No evening was complete without stopping at the Sonic drive-thru. They had tons of tasty, cheap food, like frito chili pies, and steak sandwiches (actually breaded and deep-fried hamburger patties). But no matter what, my order always, always, included tater tots, sometimes covered with melted slices of cheese.

I just love those little gems. These days, when we visit Elizabeth City, The Kid won’t leave town until we’ve stopped by Sonic for tots. When we drove our little scholar up to college for the first time, our route was planned in conjunction with the Sonic national map. 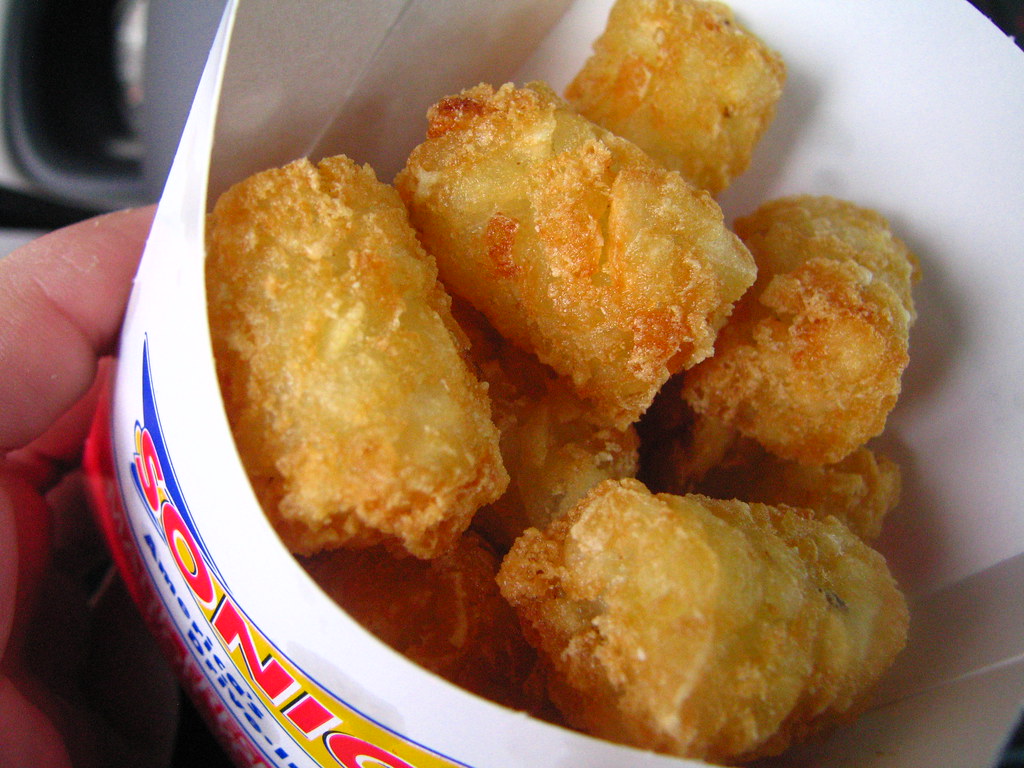 Recently, tater tots have acquired celebrity. I looked at eight restaurants in Durham. Four had tots on the menu. I’m sure it won’t be long before they have their own reality show.

Every manufacturer that has frozen potatoes sells tater tots. I’ve tried many of them. I’ve baked them and fried them. They’re all pretty much interchangeable, and loaded with sodium, and unpronounceable chemicals. Mmmm, factory goodness.

Following my philosophy of “Why buy pre-made when I can fiddle in the kitchen for multiple hours and make it myself?”, I decided to try and make homemade tater tots.

Surprisingly, they weren’t too hard to make from scratch. The cool thing about making your own is you can add any flavors that you like to the potatoes. I like sauted onion and garlic. You can add chopped bacon, or roasted chiles, sun dried tomatoes, or herbs and spices. Add in any tastes you have a hankering for.

Tater Tots For People With Time On Their Hands

When the cooked potatoes are cool, peel. Grate them, by hand, largest shred. Into potatoes, add salt pepper, and one egg, lightly beaten. This is also where you add in any extra flavoring ingredients. Gingerly toss together until combined, and place in fridge for 30 minutes.

Portion cold tater mixture into tablespoons (a very small ice cream or portion scoop works great for this). When all the mixture is portioned, shape by hand into tater tot shapes. Refrigerate for one hour. This will help keep their shape when you bread them.

Prepare three part dredge:
In one container put seasoned (salt and pepper and any herbs and spices) flour.
Beat remaining eggs and milk in another.
Pour out bread crumbs into third dish.
Toss tots in flour, this dries the exterior a bit and allows egg wash to stick.
Dip into egg wash.
Roll in bread crumbs, lightly patting crumbs so each is completely covered.

Refrigerate for one hour, or, freeze them now, and cook at a later date.
Heat oil in a large pot until it reaches 325-350 degrees. Cook in small batches until golden brown and delicious.
Wah Lah…tater tots!

They really do taste better when made at home, and instead of boring frozen potato things, you have a special treat, made with one ingredient no factory can add-love.

This past Christmas, I was experimenting in the kitchen. My mom absolutely loves rice crispy treats, and I wanted to make some candy out of them specifically for her. I took very thin (1/4 inch) slices about four or five inches long, and rolled them, length-wise to get short rounds. My idea was to make something that looked like rosettes. Then, I coated them with melted chocolate. Guess what? When dipped, they looked nothing like roses, but looked exactly like tater tots.

I was going to put them into small paper cups (like for tiny cupcakes), and place them in a little tin. They looked nice, but of course I’ve never been one to leave well-enough alone. There was room in the box for sixteen. I left of them four plain. On top of four I sprinkled chopped cashews (Mom’s fave) on them before the chocolate hardened. Another four I sprinkled with crushed candy cane pieces. And for the last four, I went insane, and topped with freshly made bacon bits (I adore salty/sweet).
Placed into the box in pretty rows of four, they looked like they came from a fancy, expensive chocolatier. Mom loved them, but was a little timid about the bacon ones. Then she tried a bite. They were the hit of the collection.

There’s one dish using tater tots that I’ve thought about, but not been daring enough to make. Tater tot poutine. Poutine is a Canadian dish which starts with a plate of fries. You sprinkle them with cheese curds (another northern food that’s very much like small pieces of mozzarella cheese). Then the whole shebang is smothered in rich beef gravy. It’s the kind of food that keeps a farmer going up in the frozen north, working twelve hours of brutal, physical labor. This is something most folks don’t do anymore, so it really should be an extremely infrequent treat. But, gosh, it’s yummy

If I do make tot poutine, you can check with me to see how it turned out. You will likely find me in a bed at the cardiac unit at Duke.