Truthfully, I was a little worried and sad.

The Crossroads restaurant at the Carolina Inn in Chapel Hill had gone through 18 months of renovation.

I’ve always loved its Colonial decor.   Lots of Delft blue brocade and sunny yellow accents.  Cherry wood, golden walls, and flowing draperies worked together to create a genteel, Early American space which to me, spoke to the history of not only the university, but the South, and even our nation.  I wasn’t eager for change.

A couple of weeks ago I received an invitation to come to the new Crossroads for what was termed a “guinea pig meal”.   It was dress rehearsal before the big re-opening. 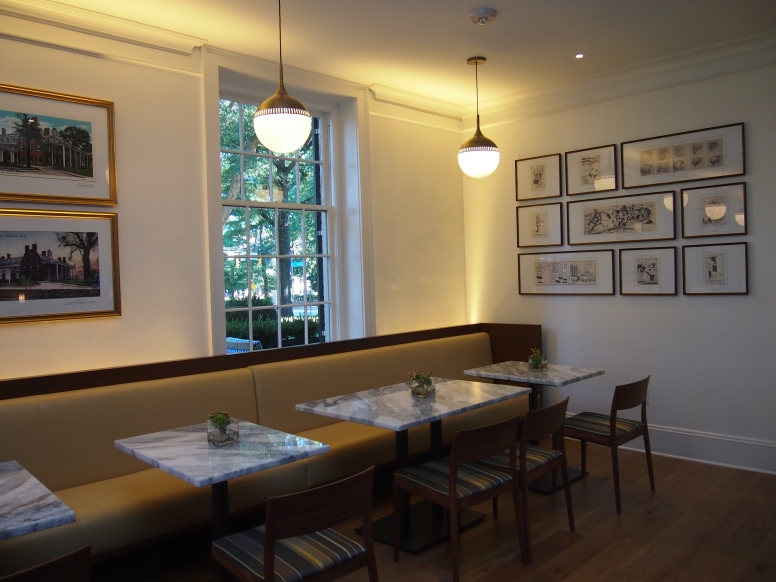 The first thing I noticed was the bar.  Instead of being enclosed it’s now part of the large open space which houses the main dining room.  It’s much lighter and more airy, but they kept the framed vintage Daily Tar Heel cartoons; thus retaining the irreverent, casual vibe.

After we were seated, I really started to look around the space.  It’s bright, and fresh, with almost bare white walls.  The large windows are uncovered.  The furniture and fabrics are muted and serene.

It should have felt cold and sterile.

But it really worked.  The bones of the beautiful architecture of the room were visible.  The large unadorned windows looked out on trees that almost made me feel I was in an elegant treehouse.

It reminded me of a very old historic home which had been rescued and lovingly restored.  My view of the old décor mutated from stately and elegant, to fussy and dated.

I ordered a new menu item recommended by Crossroads executive chef James Clark; pickled shitakes.  When they arrived, I was sold.  They were plated on slices of cornbread with a drizzle of lemon aioli.  They were briny, acidic, and unexpected.

Chef James kindly sent me the recipe to share.

Pre heat oven to 400 degrees.  Place mushroom caps in a bowl and drizzle over with the olive oil.  Season with the salt and pepper.

Place mushrooms on an unlined cookie sheet with the mushroom gills down.  Put in the oven and cook until edges get crispy

Very simple: mix, heat and pour over the mushrooms!  Allow them to cool then they’re ready to serve.

Just last week I had my very first Cuban sandwich.  I liked it, but I think these would be amazing as a replacement to the regular dill pickles usually found on it.

Any dish where a pop of bright acid is needed would be a perfect match.  Maybe as an Oriental twist on dressing for seafood:

Whisk together and chill for at least one hour before service.

As much as I enjoyed the dinner, Petey was especially affected by it.  He dined on the trout, which was served on a bed of roasted apples, corn and Swiss chard with a cider moonshine reduction.

Every item was perfectly prepared.  And obviously Chef had put much thought in the accompanying ingredients.  Each successfully worked with the others.

When Petey tried his first forkful with a bit of everything on it, he actually moaned.  I could literally see his face change as he realized the true meaning of fine dining.

It’s not chowing down on fancy expensive grub while wearing tight shirts and uncomfortable shoes.  It’s not seeing or being seen in the hottest, trendiest spot.

It’s a symphony on a plate; where each component has been teased into the best version of itself.  It’s thoughtful arrangement of the composition with all parts coming together in constantly changing permutations that surprise and delight the diner.

It is edible art.