Petey and I went out for lunch today to celebrate our anniversary.

We went to Golden Corral.  I don’t remember the last time we were there, but that new all-day breakfast was a culinary siren song.  Pink lemonade, enough starch to open a laundry, two different chocolate fountains and three kinds of gravy, now sharing the billing with scrambled eggs, bacon, and French toast?

Since we visited last they must have doubled the number of dishes they serve.  I always start with a salad, next a plate of breakfast grub, one of dinner stuff, and then it was time for dessert (yummy chocolate pie and 2 pieces of shockingly delicious fudge).

So…supper tonight, at 10:00, when I was finally hungry, was very light.  I had a cup of instant hot cereal from Special K, called Nourish.  It’s a blend of oats and quinoa.  They have three varieties; I buy the almond/maple/brown sugar version.

Then I jazz it up.

I am pathologically, congenitally, unable to leave well enough alone; no sleeping dog goes undisturbed around me.  I never met a recipe, a prepared food, or a boxed dinner with which I couldn’t, nay, wouldn’t tinker.  In my kitchen, nothing is safe or sacred.

Instead of just adding boiling water to my Nourish and calling it a day, I fiddle.  I add a pinch of salt, some fresh nutmeg, a little vanilla, and a handful of dried fruit and nuts.

The calorie count goes up a bit, but I’m adding protein, good fats, and lots of vitamins and minerals.  Another benefit is the protein, complex carbs, and fiber makes me feel fuller longer.  So, I’m not cranky and haunting the kitchen with a grumbly stomach an hour later.

I’m no model of virtue, though.  Sometimes I monkey around just to make it taste better, nutrition be damned.

Blue box mac is very popular at my house.  I don’t care who knows it; I’m not ashamed.  Often I add corn or lightly steamed broccoli.  I always switch out the margarine to butter (sometimes browned butter), and instead of the recommended low-fat milk, or water, I use heavy cream.  Yeah, I know, OMG, my arteries.  But you know what?  We only eat it about once a month or so, and darn it, it’s so much tastier that way. It’s truly the most comforting of comfort foods.

When I make a tuna sandwich, I add a tablespoon or so of raw sesame seeds.  It adds flavor, texture, and among other beneficial things; iron, calcium, vitamin B1, and fiber.  The Kid, a fiddler as well, won’t eat tuna without the generous addition of non-pareil capers.

Grilled cheese gets a light schmear of Dijon mustard, and lately, instead of butter, I spread a whisper-thin layer of mayo on the outside, for the grilling.  It has fat like butter, but the egg in the mayonnaise gives the bread a snap when you bite into it that’s eminently satisfying.

A boxed brownie mix does not enter my oven without some chocolate chips and a scoop of cocoa powder.  And I always replace the water with coffee.

Sometimes I perk up the predictable with the simple addition of spices, fresh herbs, and/or aromatics.

You’d be surprised what some freshly cracked pepper in the cooking water and a handful of chopped fresh parsley does to a simple bag of egg noodles.  Try adding horseradish, Siracha, or curry powder to some Duke’s or Hellmann’s.  Your next roast beef or turkey sandwich will thank you. 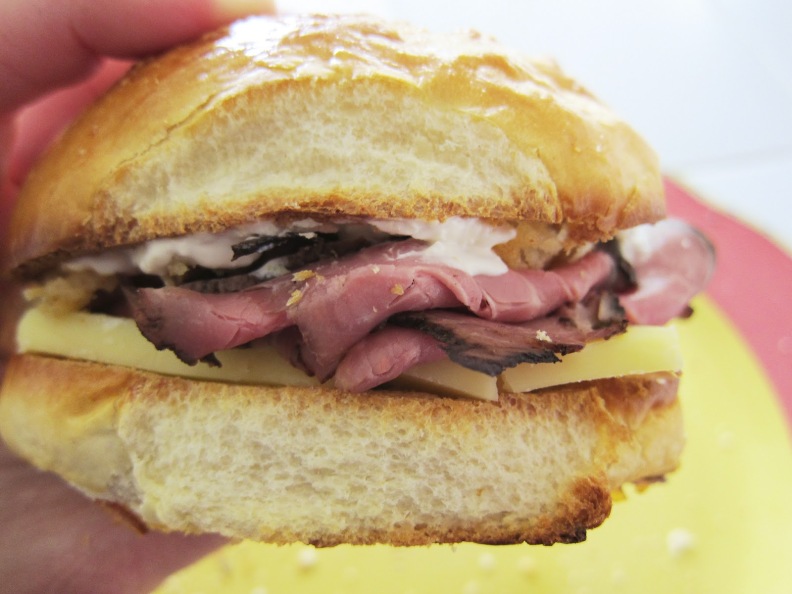 I like to keep dried mushrooms around, so I always have them to add to a dish.  I rehydrate them in a pot of boiling water.  It’s goosed with salt and pepper, and a couple slugs of Worcestershire.

I have what looks like a large tea infusion ball that’s made for spices (check out cooking stores and the web for them).  Into it I place fresh thyme, rosemary and a bay leaf along with some peppercorns.  When the mushrooms are ready, I then have a pot of fully flavored mushroom stock.

So the moral to this story is: don’t settle.  Get creative, jazz things up, and become the Dizzy Gillespie of your own kitchen.