A jillion years ago, back when fire was considered magic, I worked as a bartender at a country club in Raleigh.  And if I wasn’t at my post in the bar, there was only one place where I could be found.

When I began working there, I hung out in the kitchen because, food (the employees were exceedingly well-fed) But then I got to know the cooks and appreciate their work, thus became interested in cooking.  This also taught me another very important lesson: that everybody who cooks has something to teach me.

Even this frightening pair has something to teach me…

There were countless really good cooks that I never thought to learn from; and because of time, distance, or mortality, the opportunity has passed.  So now I bug everyone that will put up with me.

When I originally began writing a food column, I decided to have two categories of special pieces.  Along with my normal ramblings, occasionally I would have field trips; hanging out and cooking with people I admire, and also food chats; talks about food with both well-known and regular, anonymous folks.

Last week I had the first fusion of the two.

When I was little I lived in Puerto Rico, and it was like living in Mayberry.  I loved it.  I also learned to love Puerto Rican food; it’s now my favorite cuisine.  But because I was a dumb kid, I never learned to cook it, so I could only recreate it from memory and hope.

I recently met the chief of the Durham police department Jose Lopez, and learned both he and his wife, Becky are Puerto Rican.  And according to Chief Lopez, his wife is the best cook in the world.

The chief and Becky in their natural habitats.

I talked my way into their kitchen, and had an afternoon of cooking, laughter, learning, and eating.  Becky and the chief were warm, gracious, and very hospitable.  I left with new recipes, a full belly, and a huge amount of food to take home (which Petey happily devoured).

One of the dishes that we ate was plantains.  I love green plantains, either cooked similarly to French fries; tostones, or mashed, like potatoes; mofongo.  But Becky served ripe plantains. 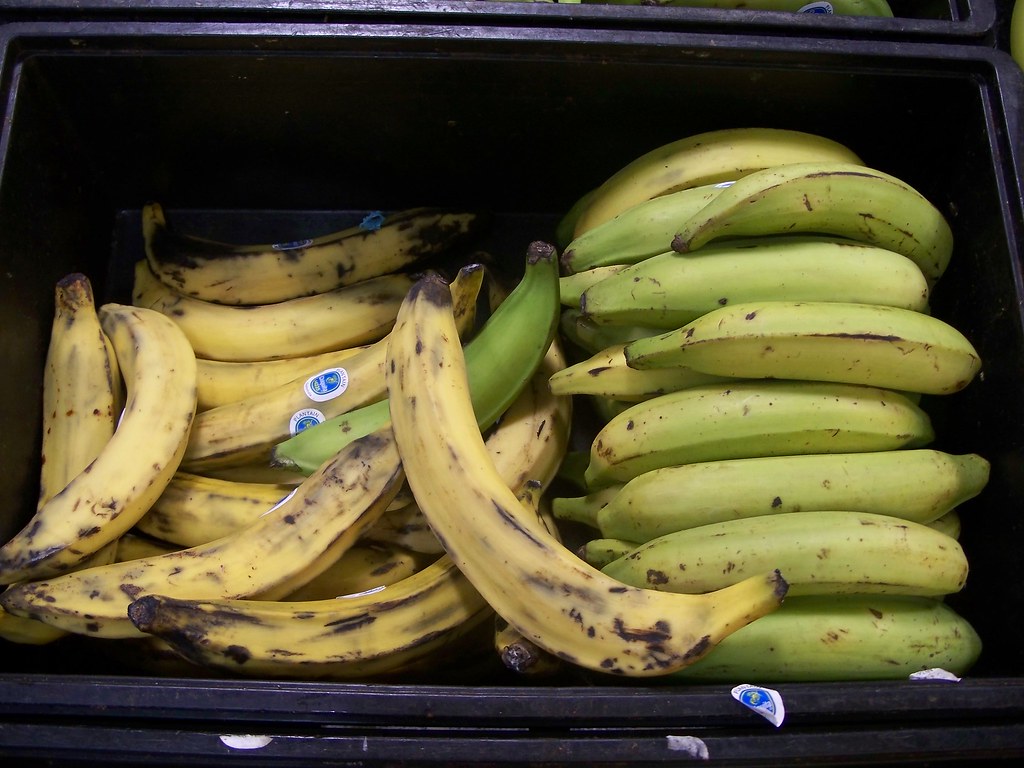 The yellow is ripe, the green unripe. Both have their own charms.

They were a perfect accompaniment to our stewed chicken, rice and beans.  They contributed sweetness and crispiness.  I’ve become a big fan of ripe plantains.

These aren’t regular bananas, they’re inedible raw and don’t peel as easily.  To peel: cut off bottom and top, and a slice couple of slits in skin all the way down each plantain; then peel it off in strips.  Slice on an angle, about ¾ inch thick.

Heat about 1 ½ inches of vegetable oil in a heavy-bottomed pan until it reaches 350.  Fry slices until they are lightly browned and crispy around the edges.  They can be eaten as dessert with some ice cream or pudding, or as a welcome sweet punch to a savory plate.

I begged Becky, and she agreed to be my Puerto Rican cooking coach (woo-hoo!).  So I’ll be sharing more of her lessons and recipes in upcoming columns.

Other than eating, there isn’t much I love more than soaking up the knowledge of other cooks.  So please, I’d love for each of you to join my pantheon of instructors.  Write to me, and take me to school.  I will appreciate each communication, and I’ll share with the rest of the class in future Dispatch essays.