This week I have a dish that is all things to all people.  It’s a salad.  It’s a side dish.  It can be a dip or spread.  It’s a rice or pasta dish.  Turn it into a casserole or soup.  Use it as a stuffing, for any number of foods in need of filling.  Put it in a wrap.  It’s even a relish.

And to add to this awesome wonderfulness, you can make up a batch that will feed six in less than 20 minutes, for less than $4.00.  With stuff that many people already have on hand.

Good grief, Charlie Brown.  Can it really be true?

When I decided on this column, I got to thinking about different ways it could be used.  The only way that I can’t recommend is dessert.

At its most basic, it’s a salad/veggie side dish.

1 yellow onion, sliced into half moons

Heat the olive oil in a non-stick skillet. Give the garlic cloves a light smash then throw them in and let them turn light golden.  Remove cloves and discard.  Sautee onions until they turn golden.  Remove and set aside.

Put chickpeas into pan and season with half the salt and pepper and 1/2 teaspoon cumin. Taste, and add more cumin if desired.

When the chickpeas have browned a bit, add back the onions and spinach.  Season with more salt and pepper, holding back some until the final tasting.  Stir in another ½ teaspoon cumin.

When the spinach is hot add the lemon juice.  Cook for 3-5 more minutes until heated through and well combined.  Because of the acid in the lemon juice, the color of the spinach will deepen from bright to forest green.  Taste and re-season, if necessary.

Believe it or not, it’s addictive eaten right out of the fridge.

If you were mix in a block of softened cream cheese, some mayo, yogurt or sour cream, and maybe a handful of shredded something or other, you’ve got a dip or spread you can serve either hot or right out of the fridge.

When it’s still warm, stir in some cooked rice.  Or pour in some freshly cooked pasta, along with some of the cooking water.

For a yummy soup, heat a pot of chicken stock.  Stir in the meat of a grocery store roasted chicken and some cooked orzo.  Add your spinach/chick peas.  After you put it in a bowl, sprinkle on some croutons or a handful of those canned onion ring thingys.

For a cannelloni filling, mix in some ricotta cheese, and if you want to go for it, some crumbled Italian sausage.  Stuff the shells and cover with either some marinara or cream sauce (or both).  Then sprinkle on some mozzarella or provolone, and bake it for 30 minutes or so at 350, covered, and then uncover and put under the broiler ’til it’s browned and bubbly.

Mix in some bread crumbs and Parmesan cheese, and use it to stuff pork chops or chicken breasts.

I love edible Swiss army knives.  The mushroom ragout I talked about weeks ago is in the same vein. 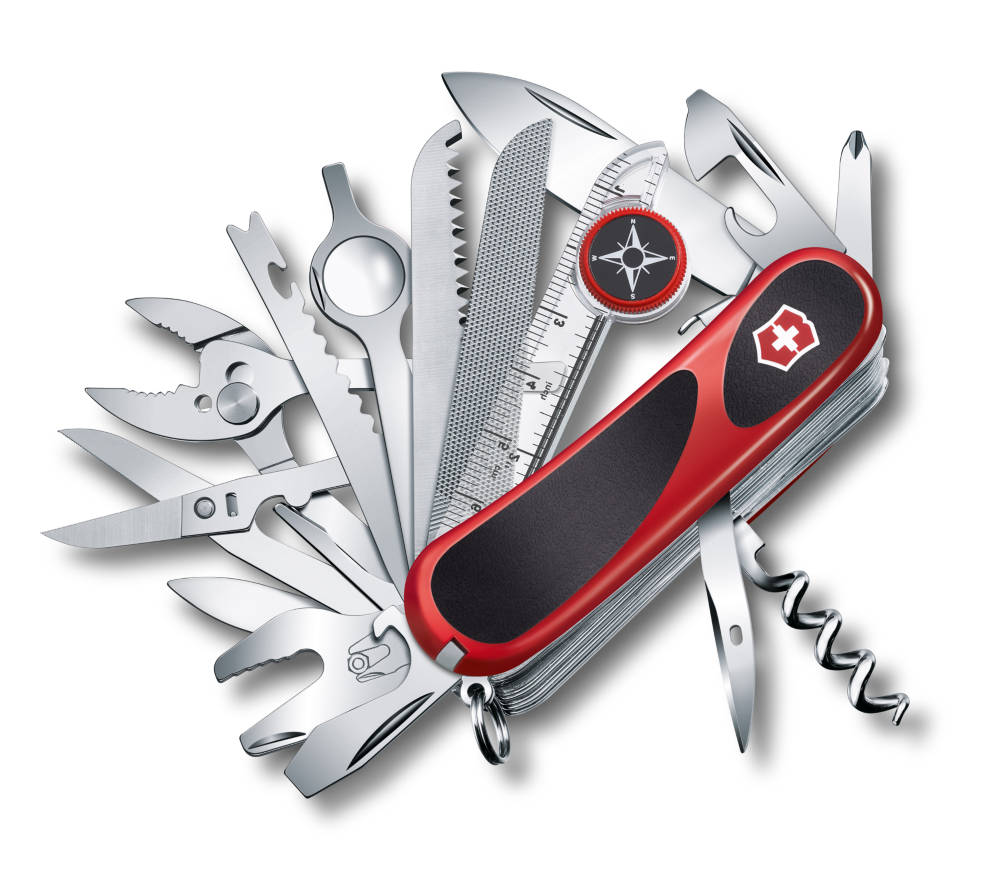 So, this actually exists…

But this spinach dish is so darn versatile that it’s the $200 Swiss Champ army knife, with Byzantine-like complexity and 101 different tools.