I’ve always felt that there are two kinds of people who frequent tea parties (not counting little kids and their guests drinking imaginary tea out of thimbles).
First, genteel ladies and gentlemen who like to get dressed up, and be around other fancy types. I don’t know a whole lot of those people; I mainly hobnob with the sweat suit set.
Next are folks who are just nuts about tea; the history and lore, the various types and flavors. My tea appreciation begins and ends with giant Luzianne bags for pitchers of sun tea. Somehow, I produced The Kid, who is a genuine, over-the-moon tea fanatic. In my child’s pantry are two full shelves dedicated to all things tea.
Last week I discovered a third variety of tea party enthusiast, and also discovered I am one of them.
It’s that enlightened subset who shows up at tea parties for the grub.
I was invited to the Washington Duke Inn (3001 Cameron Blvd.) for tea. Constance Lue, the founder of the Old North State Tea Society, was our guide through the history and etiquette of the phenomena that is afternoon tea.
Here are a few tea facts I’ll bet you didn’t know:
Tea was responsible for much of the suffragette movement. Tea houses were the first respectable venues where a woman could go unaccompanied. High tea, contrary to popular belief, is not an extra-fancy tea, but is a working man’s tea, with a full supper. And my favorite tidbit; one of the welcome benefits of an at-home ladies-only tea, was the opportunity to remove one’s corset, and actually take a nice, deep breath for the first time all day.
At the hotel, in addition to an offering of various teas, we were presented with a three-tiered stand upon which was heaped both sweet and savory treats. There were finger sandwiches, tiny quiche and deviled eggs. On the sugar-coated end of the spectrum were brownies, truffles, chocolate-dipped strawberries and fruit tarts.
In the middle tier, next to the quiche, was a tart filled with chicken salad. Petey is a chicken salad man, I’m not really a connoisseur. But since I’d recently made a batch with a giant roasted Costco chicken, I was eager to sample their version. 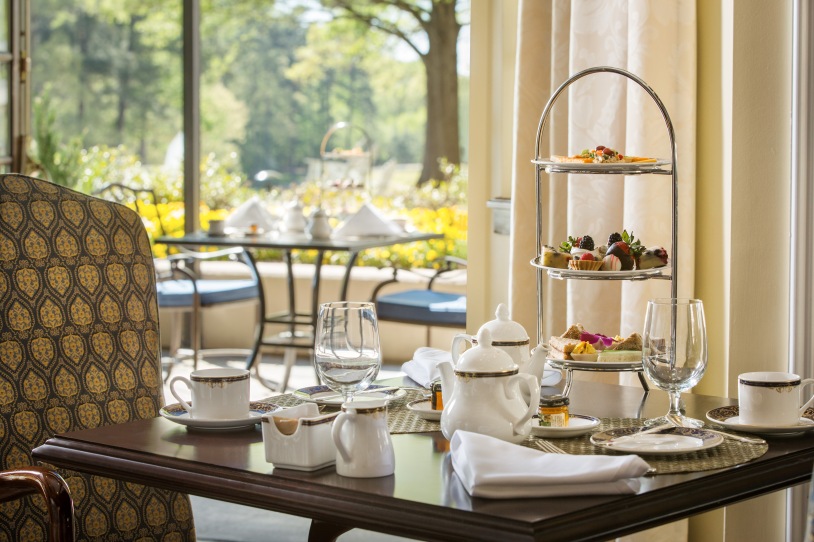 Culture and civility abound at afternoon tea at the Washington Duke Inn, in Durham, NC, held daily. And the food’s pretty darn good, too.

Chef Jason Cunningham kindly offered the recipe off the top of his head, which I hurriedly transcribed. So the amounts may be off a bit, but the beauty of chicken salad is its flexible and forgiving nature.

Toss first 5 ingredients with enough mayo to moisten. Fold in grapes. Season, and taste for seasoning level. Sprinkle top with pecan pieces, so the nut intolerant can remove if needed.

I thought for fun, I’d give you my newest chicken salad recipe, to compare.
My original salad had toasted pecans. But I decided since the WaDuke salad has pecans, I’d switch to pistachios, as a nod to them. The Fairview at the Washington Duke consistently does amazing things with pistachios.

Mix together with desired amount of dressing. Taste for seasoning. Refrigerate 30 minutes before serving.

You can have chicken salad on dainty, crust-less bread with a cup of tea.
Or, you can eschew the gloves and hat, throw on a sweat suit, load up some Wonder bread, and serve with Funyuns and a bottle of Yoo-hoo.
But regardless of which style you choose, don’t stick out your pinky. That’s actually rather tacky.
Thanks for your time.