The sad, grubby little clipping had been stuck on the fridge forever. I’d torn the recipe from some magazine months, or even a year ago.

But the last time we were in Costco, I decided I was going to put up or shut up. I’d give that recipe a try. So, I bought one of their roast chickens.

I’d like to stop right here, for a moment, and talk about the rotisserie chickens at the supermarket.

I think a few years ago a law must have been passed that every grocery store in the country has to sell a roasted chicken.

Costco has one of the best clucker deals around. For 5 bucks you get something so large, it might possibly have been a pterodactyl.

I got 8 cups of meat from the one I bought. Since I only needed 3 cups, I froze a large zip bag of the rest. I made a big pot of pasta with some of it, and a bunch of chicken salad with the rest. So for $5, I got meat for 8 meals, counting leftovers.

But, back to the recipe.

When I was in the ninth grade, all the kids who had taken Spanish for 3 years went to Mexico for spring break. We visited Mexico City, Jalapa; a university town, and Veracruz; a beach town.

Most of the meals we ate were at the hotels, as part of the package. But one night in Veracruz we went to a restaurant and ordered off a large menu. One of our chaperons ordered fish, and a whole fish (eyeballs and all) was brought to him. I’d never seen anything like it in my life. Freaked me right out.

I finally picked something that the other kids assured me wouldn’t be too spicy for my famously wimpy palate—enchiladas Suizas de pollo (Swiss chicken enchiladas).

They were brought out to me, and my classmates were right on the money. They were zippy, but not crazy-hot. There was an abundance of cheese and sour cream (which is why they are called “Swiss”). I loved them. They have become one of my favorite Mexican meals.

The recipe I cut from the forgotten magazine was a casserole that had a hot red sauce and was a riff on tamales. But I don’t do hot sauce, and once I had changed ingredients, added stuff, and made it my own, the experience was very much like my beloved enchiladas Suizas. The casserole was easy to assemble, and could be done in stages. The traditional enchiladas are more labor intensive and the results are not always consistent. The casserole gave me all the flavor and texture, without the work and drama.

*Recipe note: I used homemade guacatillo sauce, or you can buy some from your local Mexican restaurant. A very good bottled alternative is La Victoria mild green taco sauce. Also, I split the casserole into two 8X8 pans. One pan I finished cooking and we ate that night. The other I got to the point of the second bake, wrapped it up tightly, and froze it.

In a large bowl mix first 7 ingredients and 1 cup cheese. Pour into pan and bake for 20 minutes.

Remove from oven, and pierce casserole about 12 times with sharp knife. Spread guacatillo over top. Scatter chicken over, and cover with the rest of the cheese. Bake for 20 minutes. Let rest out of oven for 10 minutes, then slice and serve. Makes 8 servings.

I was delighted with the finished dish; we loved it. Poor old Petey overindulged, and got a bit of a tummy ache. But not too much of one, because at lunch the next day I nuked the last slice for him, and he happily devoured it.

One would think, to hear me whine week after week about too spicy this, and hellishly hot that, that my favorite cuisine might be something famously bland.

But one of my very favorite national cuisines is Mexican.  It’s rich and comforting.  Much of it is simple, but simple in the way a Chanel suit is simple; classically elegant.  It’s full of fresh flavors, yet much of it is slowly cooked, “peasant” fare.

But I still have the heat tolerance of a snow angel, so I’ve learned some self-protective hacks.

Dairy is my friend.  The heat from chilis comes from an oily substance called capsaicin. Milk, or more commonly, sour cream contains something called casein.  The casein is a fat-loving compound which binds to the fiery lipids and washes them away.  Water only spreads the heat, and while alcohol also works, you’d have to drink about a fifth of tequilla to cool a couple of bites.

And while some folks prove this doable on a daily basis, I’m the cheapest of cheap drunks who would be swinging from the chandelier or napping under a table after three or four swigs.

So, it’s sour cream for me.

Green is usually (but not always, not by a long shot) milder than red.  Green sauces normally contain tomatillos, a sour fruit that looks like a green tomato, and brings no heat to the party.  And of course there is my very good, very green friend; avocado who feels to me like it cools thing down a bit.

One of my favorite dishes on a Mexican menu is chicken enchiladas Suizas.  Suiza means Swiss, and connotes pale creamy cheeses and sauces. 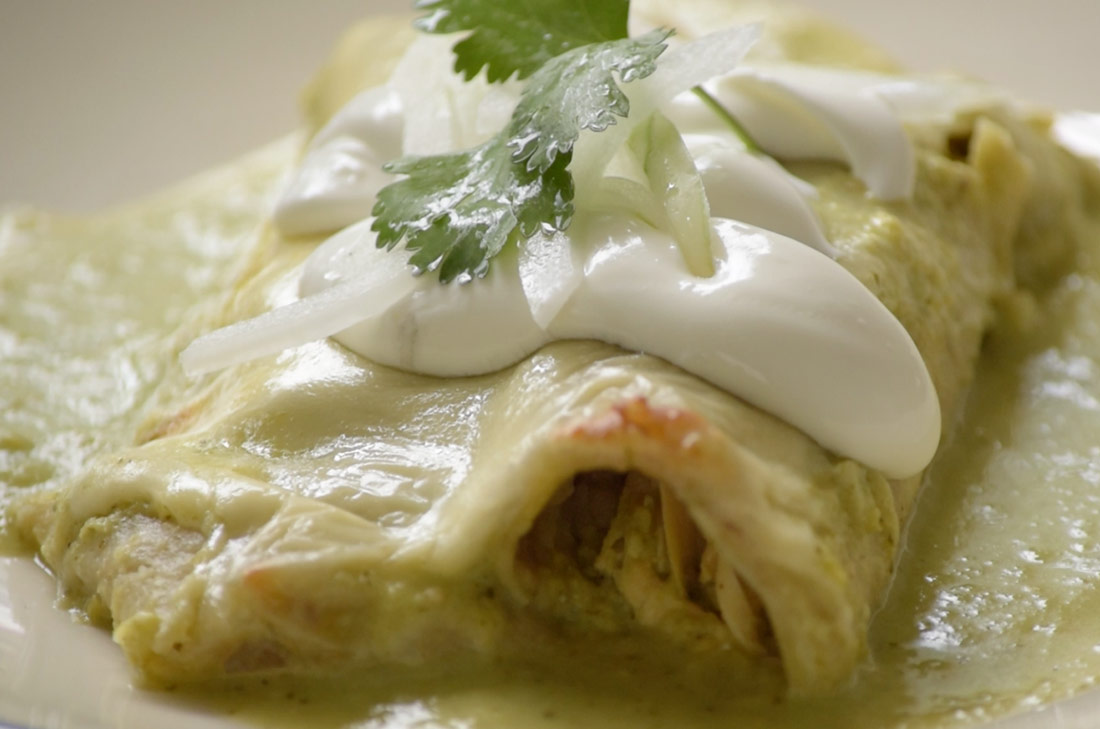 Enchiladas are terrific in restaurants, where all you have to do is order them.  But at home, not so much.  You have to make the filling, stuff them, roll them, and lay them in the baking vessel.  Then bake them off while hoping they don’t fall apart or end up with dry, burned tortilla parts that didn’t get sauced.

Years ago I found a spicy Mexican cornbread pie thing.  I changed some ingredients and turned it into an easy family favorite with all the flavors and textures of those creamy green enchiladas.

Remove from oven, and pierce casserole 12-15 times with sharp knife. Pour and spread salsa all over. Scatter chicken on top and cover with rest of cheese. Bake 20 minutes. Let rest out of oven for 10 minutes, then slice and serve with garnishes.

And it gets even easier.  You can take it right up to the second bake, cover it with plastic wrap and refrigerate up to 24 hours before finishing.  Just leave off the top cheese then sprinkle it on right before baking.

And if you do choose tequila to quell spiciness and end up with a lampshade on your drunken head, that’s your choice—but please, send plenty of photos.