I’ve been friends with Maxie for forty years.  We met when we started tenth grade at Northeastern High School, in Elizabeth City.  I was a loud fat girl, and he was a very quiet, studious young man, and one of the kindest, gentlest people I’ve ever known.  A few years after graduating, we moved separately to the Triangle.  Unfortunately, after a few more years, we lost touch.

During a class reunion, we reconnected.  I wasn’t fat, but I’m still loud, and Maxie, although remaining quiet and sweet, had turned into a hunk.  This time though, we didn’t lose touch and since then try to see other for lunch every month or so and are as close as we’ve ever been.

A couple years ago, I was honored and thrilled to be a part of his wedding.  Maxie married Mark, whose heart is as big as his booming voice, and who is happy to take charge, make a fuss, or order another round, whatever’s needed at the moment.  He’s also a darn good cook who loves to experiment and try new things in the kitchen.  We bonded over our mutual love of tacos and astonishment at Maxie’s almost total taco indifference.

The last Tuesday of every month, their church has a potluck/community dinner.  Everyone’s welcome for a meal, regardless of church membership and ability to bring a dish.  It’s a pretty awesome tradition.

For June’s dinner, Mark had organized a dessert competition.  They invited me to join Maxie as a celebrity judge, using the very loosest definition of the word, “celebrity”.

I made up a batch of my horseradish potato salad with peas and carrots, and Petey and I went to a potluck.

Petey was ecstatic, because there was fried chicken.  I was pretty happy to find I had to sample ten desserts.  There was a gluten-free peach cobbler, a brownie pie, two sweet potato pies (including the best sweet potato pie I’ve ever eaten—working on the recipe for it), along with some other treats, some great, some…interesting.

Zest of key limes for garnish

Grease and flour a Bundt pan and set aside.

Pour into a Bundt pan that has been greased and floured.

Cool in pan on a rack for 5 minutes. Then remove from pan and cool completely.

Combine all ingredients in a mixing bowl and beat on high until smooth. Spoon frosting into a piping bag and pipe the frosting over the top.

So, why was Maxie mortified?

Because Mark made the winning cake.

And even though Maxie hadn’t been home when Mark baked the cake, and it was a blind taste test, my friend was convinced that people would think that the fix was in.

But nobody questioned Mark’s win.  Because it’s a ridiculously delicious cake.

What’s better than lounging around your pool, drinking a thick, creamy, chocolate milkshake?  Or if you’d rather, a daiquiri; you be you.

How about Antonio Banderas holding that glass for you, and bringing the straw to your lips.

You know…I don’t even need the pool, the milkshake, or the boat.

What’s better than lounging around your pool, sipping on a drink held by Antonio Banderas?

Drinking from a glass held by Antonio Banderas while lounging around the pool on your disgustingly opulent yacht.

In that same vein, what’s better than a creamy lemon cheesecake? 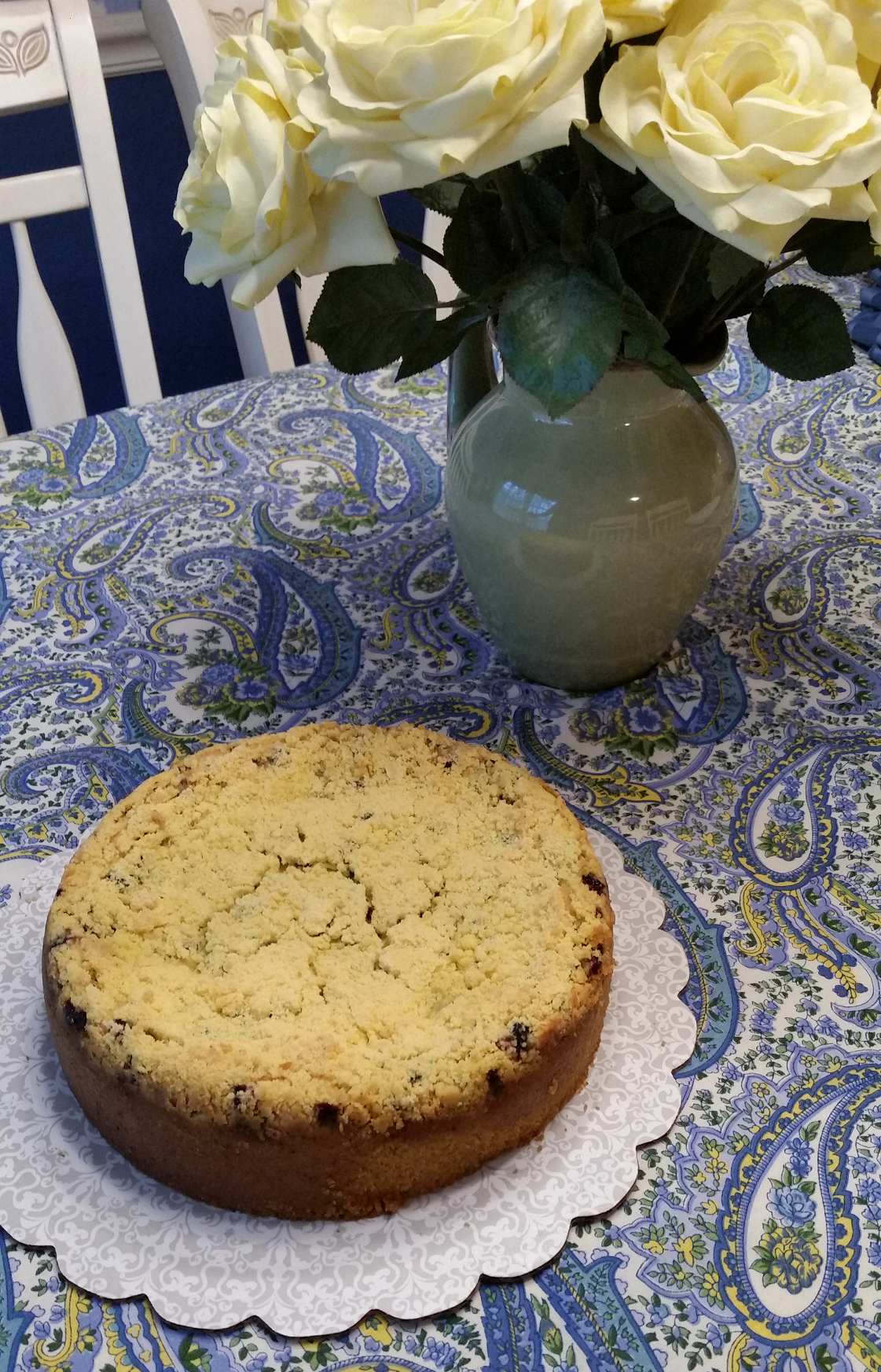 A creamy lemon cheesecake that’s unbelievably, insanely, easy to make, and topped with a lemony blueberry streusel, that’s what.

When I started cooking in earnest, I loved to pick up the little cookbooks in the checkout line in the supermarket.  My favorites are the Pillsbury Cook-Off booklets.  They have the top recipes from all categories.  I purchased my favorite, which I still have and use, in 1994.

Although there are quite a few dishes in it that I still prepare, there’s one recipe in it that I’ve made literally hundreds of times.  It alone was more than worth the price (which back then was all of $2.75).

As always, I played with it, tweaked a few things, and made the recipe my own.  The newest twist is the addition of blueberries.  I love them, but my mom’s really crazy for those navy nuggets.  She is whom I had in mind when I made the change.

It would make a terrific dessert for Easter dinner.  And it travels great, in case you’re doing dinner elsewhere. 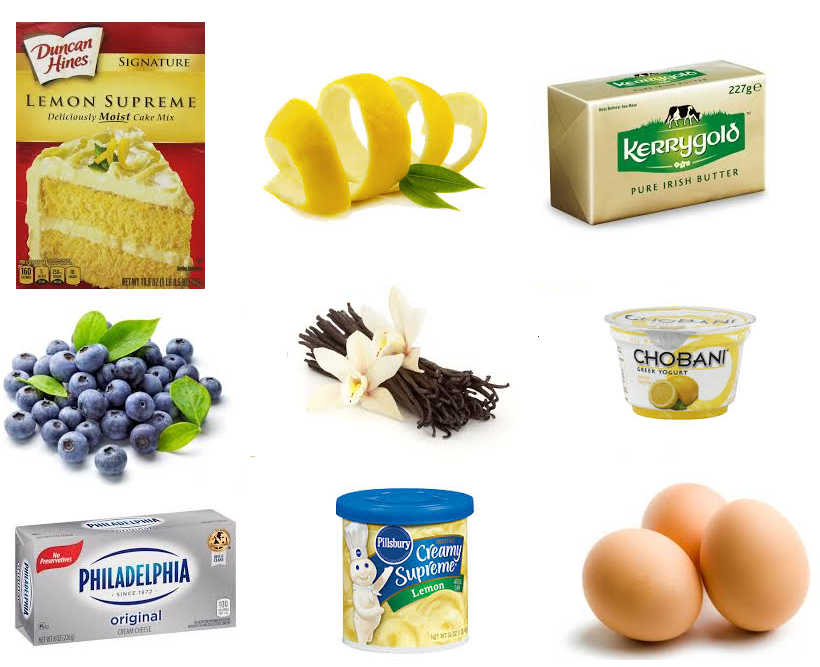 Heat oven to 325 degrees. Lightly spray bottom of 9 or 10-inch spring form pan with non-stick cooking spray.  Place a piece of spayed parchment that is about 2 inches larger all the way around over the bottom, then clip the bottom and ring together, letting parchment hang outside.

Blend cake mix, butter, and zest in large bowl at low speed until crumbly. Reserve 1 cup of crumb mixture for topping. Press remaining mixture into bottom and 1 ½ inches up sides of pan.  Using a metal measuring cup to help form it will get a smooth, even, crust.

Bake 1 to 1 ½ hours or until center is set, but slightly jiggly and edges are light golden brown. Cool 30 minutes. Run knife around sides of pan to loosen. Remove sides of pan, then carefully slide the parchment off the pan bottom onto serving plate and trim the excess paper. Refrigerate 2 hours before serving.  Slice with unwaxed dental floss or serrated knife dipped into very hot water.  Sliced thinly—and you really should, this serves 16. 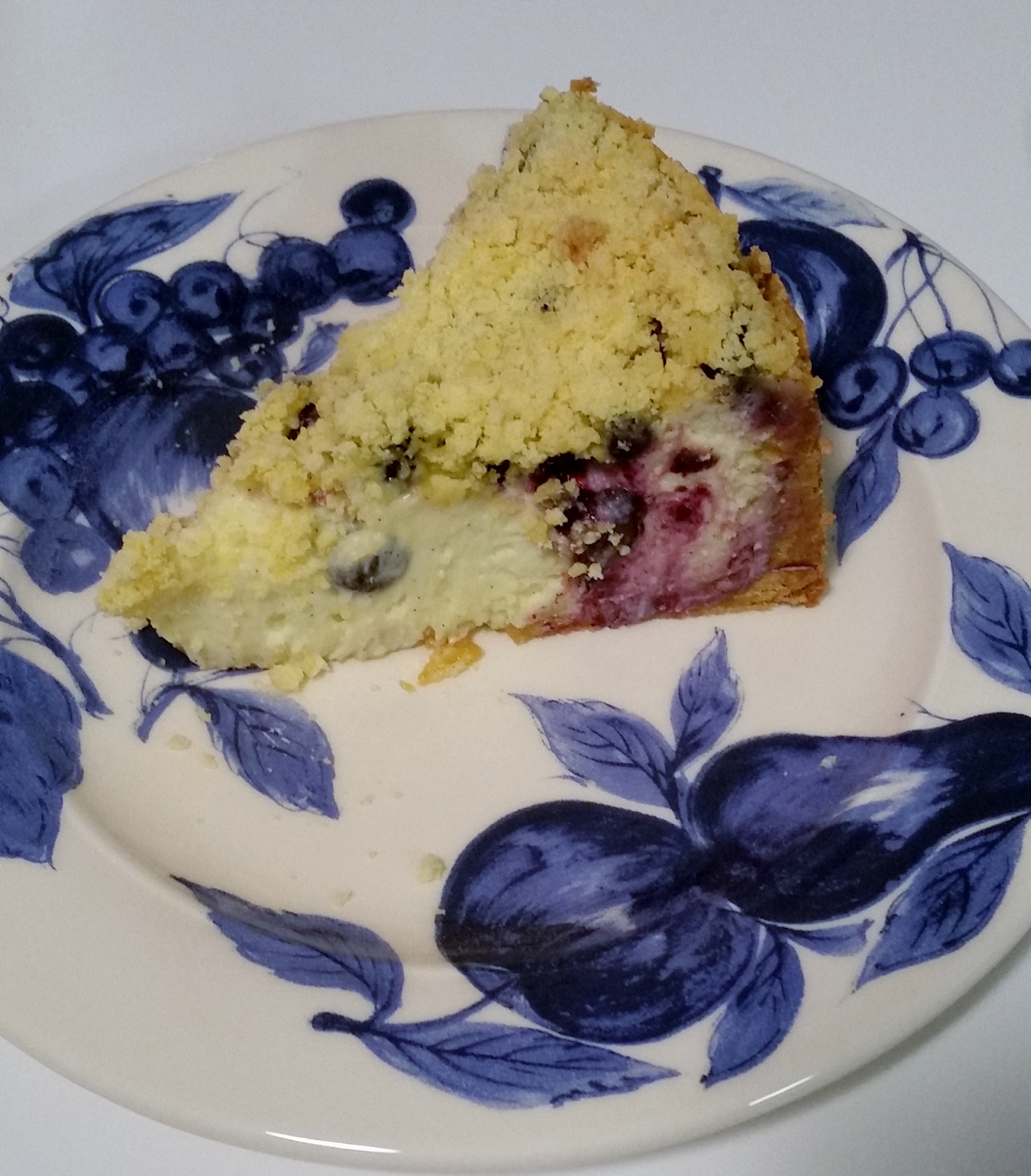 Store leftovers in the fridge.

This makes a delicious lemon cheesecake.  But the only thing limiting the potential flavor is what kind of cake mix, frosting, and yogurt you pick.  You could also combine flavors, like chocolate and coffee, vanilla/pomegranate, or orange/caramel.

Heck, this fall you could go nuts and get your pumpkin spice on.

Even though it was a dog biscuit, anything that smells that good baking has got to taste amazing, right?
Well, we’ll see.
Y’know, I should probably back up a bit here.
Last year our Anatolian shepherd, Riker was having skin issues. The poor guy had allergies and infections. He was miserable. Licking, chewing, and scratching left him looking like Chupacabra; balding and kind of scary.
While our vet worked on getting him over it with medication, I decided to see what I could do from our end.
His kibble was as simple and healthy as could be purchased. I cut out all table scraps, and looked at the one other thing he ate regularly—his doggy treats.
We’d been giving Riker chicken jerky. I’d heard something about problems with chicken from China. I did some research, and found out that thousands of dogs had been sickened, and many had died after eating the Chinese chicken. Frighteningly, our pup’s brand was sourced from there.
I wasn’t sure if it was the jerky that was plaguing our pooch, but it got tossed that day. I decided to only feed Riker treats that I had made from scratch, so I knew each ingredient.
Every month or so, I make a fresh batch of pumpkin-peanut butter cookies for him. They take about 20 minutes to get in the oven, and bake for another twenty. After that I turn off the stove and they sit inside until they’re completely cooled, so that they dry out and get crispy.
And for whole time, they smell absolutely amazing. Somehow, putting heat to the combination of peanut butter and pumpkin produces a stunningly fantastic aroma. Because they sit for a while in a warm oven after baking, the house is perfumed for hours.
And this is where we came in. I didn’t want to eat Riker’s biscuits, but I knew that a fragrance like that had to translate into fabuliciousness.
I’d never heard of any recipes that used the combo, so I looked online.
Bupkis. There were no recipes to be found. I decided there were two possible explanations for this.
One: it had been tried, but the combination of peanut butter and pumpkin was so horrifyingly noxious that there was an unspoken agreement among the population of the earth to never speak of it.
Two (and much more likely to my mind): that I was a straight-up genius. That future generations would speak my name in hushed tones of confectionary reverence.
So it was up to me to come up with a recipe to test my theory. I ultimately decided to make a gooey butter cake. It’s a sort of cheesecake with a cookie crust, and a sweet, rich filling. 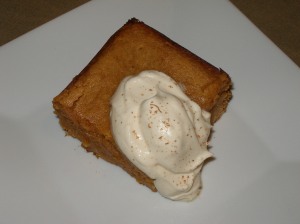 Baking it, the same amazing aroma filled my kitchen. I was crazy impatient for it to finish and cool.
Finally I tried it. It tasted like flannel pajamas fresh from the dryer; warm and cozy.
I’m not sure why nobody’s done this before. But I also suspect I’m probably not the culinary genius of my generation—darn it.
And by the way, Riker’s skin is doing just fine.
Thanks for your time.