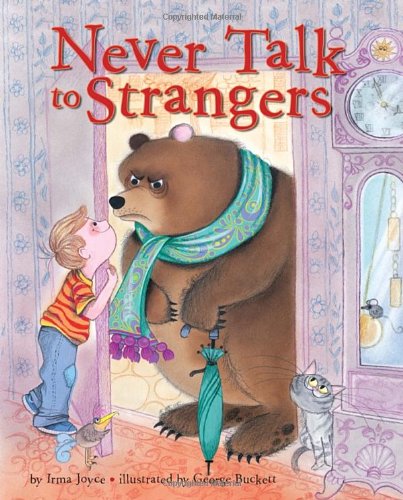 Yeah, yeah, yeah, don’t talk to strangers.  I heard it from my parents when I was a kid.  Later on I heard it from Petey and The Kid (Don’t they sound like a buddy cop movie, though?  Maybe played by Bob Newhart and Tim Curry).  And I still get it when I’m out—pretty much every time.

But I pay them no mind.

Costco came to our town when The Kid was in elementary school.  The folks there, are to a person, kind and cordial. 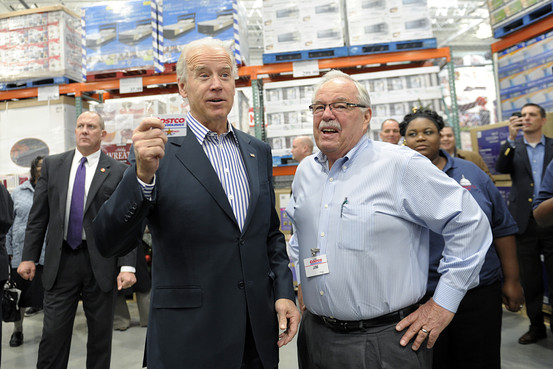 Shopping there I quickly became familiar, then friendly with the staff.  Since turnover is low, many of the people that worked there on opening day are still there.  And my child adores each and every employee in the place.  Each visit with The Kid is a series of heys and hugs with numerous adopted aunts and uncles.

A quick run for one or two items never takes less than 30 minutes.  But all of those beloved folks were at one time, complete strangers.  And one should never speak to scary, scary strangers.

Our last dog, Riker, was 200-pounds of pure friendliness.  Everyone within a two-mile radius loved him and looked forward to him stopping by.  He was a celebrity, way more popular than anyone else in our family.

The Kid (L) and a young, healthy Riker.

Every policeman, sheriff, school bus driver, mailman, and UPS guy that comes to our neighborhood has selfies with him.

His last illness lasted months, with him getting weaker every day.  Petey and I would put a blanket sling under his belly, and gently carry him outside to lie in the sunshine.  There was a steady stream of human and canine friends coming by to tell their sweet friend goodbye.  When I broke the news of his passing, almost every person cried.  His sweet friendly demeaner endeared him to all those “strangers”.

Every once in a while, my amiable ways can cause things to go a little sideways.

One afternoon my mom, a toddler-aged Kid, and I were walking through the parking lot of a local mall to get the car and go home.  Two teenaged guys were working on a car with the hood open.  Having driven my share of less than reliable autos, I felt for them.

Having driven my share of less than reliable autos, I also keep jumper cables in the car.  I asked the young men if they needed a jump, and could I help?

They hadn’t noticed us walking up, so were so startled one of them bumped his head on the hood.  They quickly turned down my offer and walked away.

Turns out the pair were attempting some grand theft auto.  My helpful gesture was unappreciated by them, but the rightful owner was pretty grateful for my meddling/helpfulness.

Growing up with a parent in the Coast Guard, our family moved every few years.  We’d land in a completely new city, not knowing a soul.

Once we had unpacked and had some downtime, I would walk around our new neighborhood and reconnoiter.  I’d talk to anybody I saw that was approximately my age.  It’s how I met almost all my friends.  My little brother was a little quiet, so when he was about five or so, I started trolling for kids for him, too.

That’s how I met the Murphy’s.  Through them, I met Petey.  So, if I’d stayed home being a good girl, I would never have met the man who was destined (cursed?) to become my spouse, and then there would be no Kid.

I had some rice and some mushrooms that I’d picked up at Costco.  Although “picked up” is a relative term.  Coming from Costco, I needed a forklift to lift the rice, and a weightlifter’s belt to hoist the ‘shrooms into our cart.

Just me, warming up for a Costco run…

The Kid was coming for dinner.  On the menu was pork chops with pretzel crust, and blistered green beans with garlic oil.  Since I had approximately 140 pounds of rice, it would be the starch portion of the program.  I also wanted use the mushrooms with the rice.

My first impulse was to maybe make a pilaf.  But I just couldn’t work up the slightest bit of enthusiasm for pilaf.  Maybe it would have been okay if there was some kind of sauce with the pork, but it was going to be baked.  And, they were loin chops, which is the leanest part of a pig.

Some type of sauce with mushrooms over the rice might work.  My very favorite is Marsala.

Maybe somewhere in this world there’s a totally delicious, yet light and healthy Marsala sauce, but I’ve never heard of it, let alone tasted it.

It’s like Big Foot.  There are people who’ve never seen him, yet are convinced he exists.  Then there are people who swear they’ve seen him, but their credibility is, shall we say, less than stellar.  As with low-cal Marsala, definitive documented proof of the beast has never been established.

My version of the sauce contains mushrooms, garlic, Marsala, and enough cream to supply Starbucks for weeks.  It’s as rich as Lady Gaga’s wig maker and as caloric as a day at the state fair.

Able to stop a healthy young heart by the third bite?  Yeah…probably.

So, back to thinking.

In the end, I decided to try something new, and once more use my unsuspecting family as guinea pigs.  I would make twice baked stuffed potatoes, but use rice instead of potatoes.

It still isn’t spa food, but it’s not as life-threatening as Marsala sauce.

Slice bacon into ½-inch pieces and place into a skillet.  Cook on medium-low until crispy.  Put bacon on paper towel-covered plate and set aside.  Pour bacon grease out, leaving about a tablespoon.

Make rice: put rice and water in saucepan with lid.  Throw in a pinch of salt and pepper.  Turn on medium-high and bring to boil.  Cover, reduce heat to medium-low and cook for 17 minutes or until all the water is gone.  Leave covered and take off heat.  Let sit 15 minutes undisturbed.

Pour into casserole and smooth the top.  Cover with foil and bake for 45 minutes or until rice begins to brown and crisp up around the edges.

Uncover, sprinkle with cheese.  Sprinkle remaining bacon on top.  Cook under broiler until cheese is bubbly and brown.  Remove from oven and let sit for 10 minutes before service. Serves 6.

Since this is a riff on loaded, twice baked spuds put in them what you like to put in your own baked potatoes.  I would have put in at least a couple handfuls of chives or scallions, but they are food-a non grata for The Kid (and Petey could live a long, happy life without them, as well). But hey, go nuts.  You know, actually nuts would probably be pretty darn good in the rice.